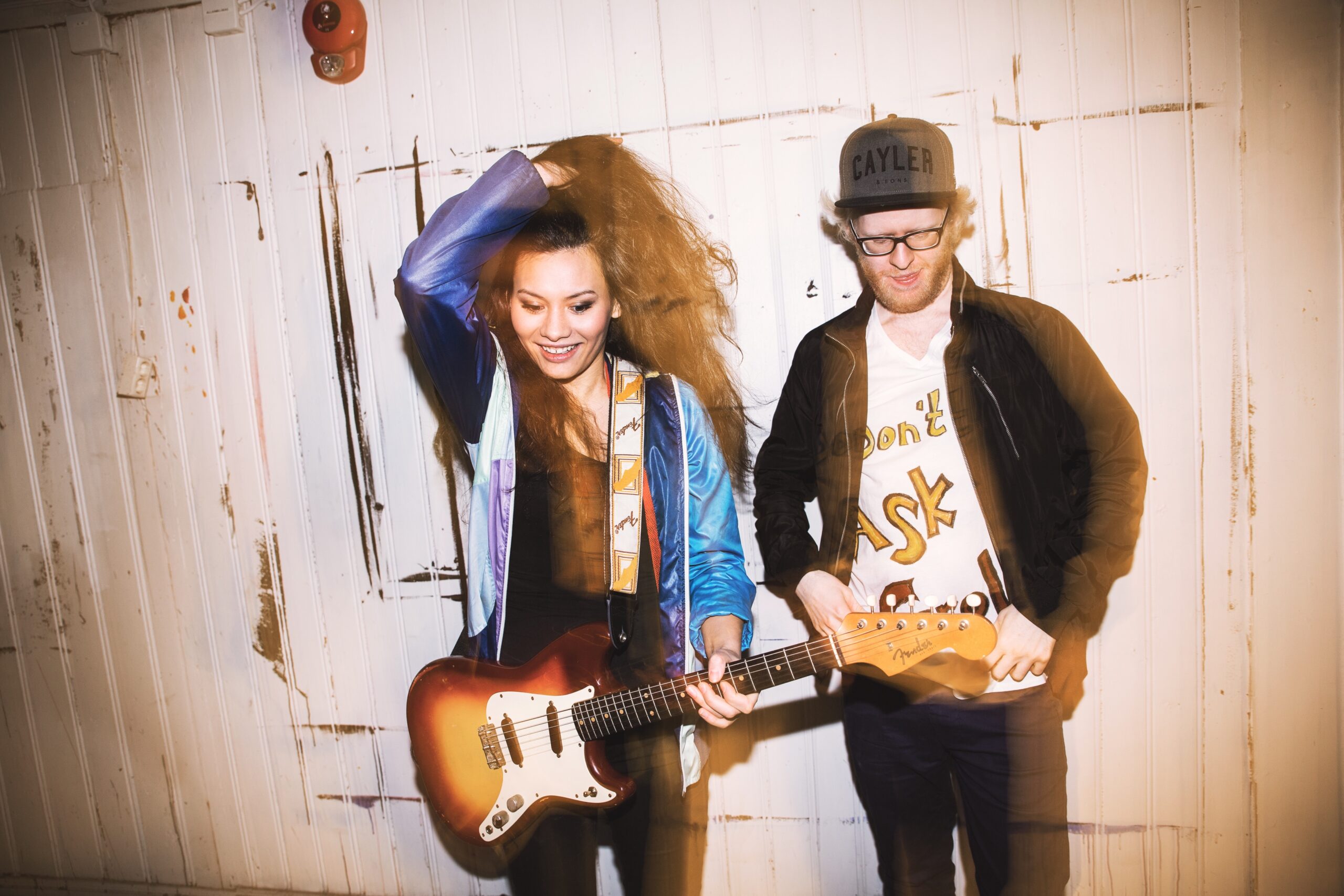 The grungy alt-pop duo ASK CAROL hails from AUMA in Norway and delivers intense sounds and high energy music that would make one think they’re a bigger bunch of people involved. But Ask Thorsønn Borgen and Karoline Strømshoved are very skilled at multitasking and putting together two guitars, drums, a synth, a drum machine and an unique splitting system for Carol’s guitar. Their sound could make you think of artists like the Kills, the Yeah Yeah Yeahs with a Nordic, melancholic twist.

Below it’s a lengthy interview in which you can read more about the band’s sound, inspiration and future plans

We, Ask and Carol, the two members of Ask Carol, became friends right after high school, when studying music in southern Norway. We were always talking about starting a band, but it would take about 7 years before we finally went through with the idea. The summer of 2015 we stayed at a cabin in the Norwegian mountains, with no electricity and no water, far away from people and civilization, only a few sheep outside the windows. That’s where our first songs were made, and where the seed to what would become Ask Carol started. One more year went by before we started for real, and Ask Carol was officially born, in 2016. Our first concert ever was at a small blues club in Seoul, South Korea, called Strange Fruit. At that point, Carol was already a somewhat known guitarist-for-hire in the Oslo music scene, and had never ever sung in front of people before, or at all for that matter. That’s why we wanted to try out our music and hold our first concerts far away from our hometown.

After thinking hard and long about the band name, with many pretty good suggestions, we ended up with the simple band name Ask Carol, the first names of our two members, Ask and Carol, put together. Ask is a real Norwegian name, coming from Norse Mythology, the Viking religion; Ask was the first human being, created by the God Odin, out of a piece of Ash-wood. You can read all about that story here: https://en.wikipedia.org/wiki/ Ask_and_Embla

Well, that is a really good question. There has never been more opportunities than there is now, and never been easier to get your music «out there», than it is today. But that is the thing, anyone can get their music «out there», so everyone does. And all those opportunities change all the time. It seems like what works changes faster and faster, and keeping up with it feels nearly impossible. What worked yesterday, won’t necessarily work today.

The first time that happened, was probably the first time we got accepted to play at SXSW, in Austin, Texas. It was pretty early on, we had just started out, it was really exciting. From then on, this has been the only thing on our minds, and what we have been working on 24/7, except for when we were at «regular» work.

Here’s what’s been said about it, we feel it’s a good description: «With a haunting, melancholic vibe and a catchy melody, this cinematic, guitar filled, unconventional love song, is a mix of dark alternative pop and dreamy indie rock. Carols intimate, yet dynamic vocal, draws you in. It’s almost like Lana Del Rey meets a garage-ier Wolf Alice.»

Here’s also a little bit of backstory, if you’re interested: «Quiet One» started out as a guitar riff and a melody, Carol brought it to practice one day, and we started jamming on it. We sort of forgot it for a while, for over a year I think, before we remembered it again, and thought: “hey, this is kind of catchy”. We put down some lyrics, we wanted something moody and cinematic, both for the music and the lyrics. The vibe was important when working on this song. It has kind of a dark, melancholic lyrical and musical theme, that might be a reflection of the time we wrote it, it was during some of the worst times of Covid, and the whole situation had us (as so many others) in a little bit of a dark place.

The recording was actually done mostely live, in our studio. We a small studio set up in the Norwegian woods, far from any city. The cows right outside the studio window adds to the rural studio-experience. After recording the basic tracks live, we added some vocal harmonies and extra guitars and stuff, before we sent it off to mixing in LA, where our mix engineer friend Matt Dyson did the final mix.

That really depends a lot, and varies a lot. We have noe one specific way we do things, but often it starts out with a melodic idea, and/or a guitar riff, from Carol, and we build from there, going back and forth many times. After a while it turns into a song, and then we record it.

It is a blend of many genres, but we have a solid base in rock. Our sound can be fierce and mean, high energy, then suddenly turn soft and comforting. We have been told many times that people are surprised when they see us two on stage, wondering how only two people can make such a huge sound. That is due to a good dose of multitasking, and Carols unique bass and guitar system. Carol’s system makes her both the guitar player and bass player at the same time, using a looper and effect boxes (but no pre-recorded tracks!). Thinking of artists like the Kills, the Yeah Yeah Yeahs, The White Stripes, could probably give you a little bit of an idea of the sound, but with our own Nordic, melancholic twist.

A feeling of wanting to listen more, ‘cause they like it 😛

Oh, so many places. The US and UK are high on the list, as we have had good response to our music there, and so many of our favorite artists are from there.

Also, Mexico, Brazil and the rest of Latin America, Germany and the rest of Central Europe. And of course, we’d also really love to do a real tour of Norway, our home country, as we still haven’t had time for a real tour here, only single concerts here and there.

It has changed a lot over the years. Most obviously, it went through a huge change when we decided to go from being a full band, of four people, to become a duo, permanently. That meant that we both, just the two of us, had to make as much sound as we used to with the two other guys. It has takin some time with trial and error, trying different things out, but we feel we have found a good way to do it. There is a lot of multitasking and looping going on, often we are playing multiple instruments at a time, but we try as best as we can to stay away from pre-recorded tracks. We feel it is important to keep the magic of improvisation and spontaneity in the music. It is way too little of that these days, everything is so polished and «clean».

We are super excited about 2022, it will be the year of our very first album release! So, that is probably the biggest thing fans can expect this year, our debut-album. We just got it back from mastering a couple of days ago, and we can’t wait to show y’all!

Apart from that, we are really looking forward to getting some touring done this coming Autumn. Finally, after way too long stuck at home, during covid.