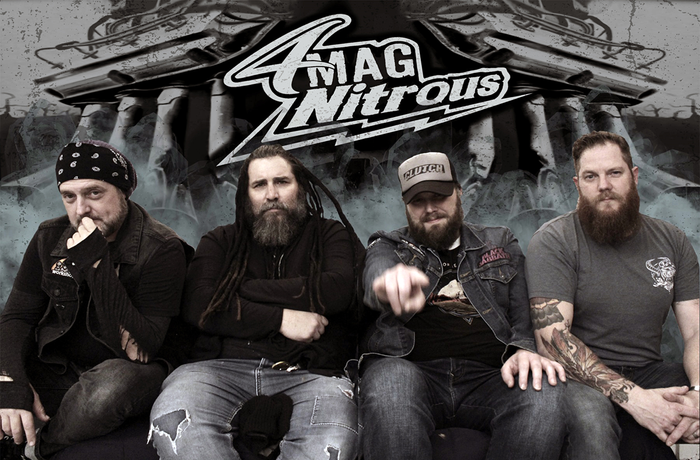 If you were driving down the road of heavy music, on the left side you have Metal, and on the right side you see scrolling mountains of Hard Rock. The middle ground is that spot between hard rock and heavy metal, it’s the road.
4MAG’s Electric Conception is the vehicle that takes you down that highway in the valley between rock and metal. And it ain’t no rented Kia, it’s a powerful American muscle car, with a gridlocked precision that indicates a hint of solid German engineering was applied for maximum stamina and torque.
Hit the pedal and feel how the music grinds like metal but stays solid like a rock under your tires. Kick the seat back a little and enjoy the singer’s yelling and growling at you from the back seat. Ignore the speed signs and keep going, you’ll be alright! The cops are only chasing you because they want an excuse to drive this fast down that road as well.

To celebrate the occasion

4MAG have released the video “Pillars of Strength”

“ELECTRIC CONCEPTION” is available on all digital platforms

If Pantera and Monster Magnet got into a bar fight, then 4MAG NITROUS would more than likely be the band playing the soundtrack for it! — Metal, Inc. (2021)

With Jol Cangiolosi’s heavy melodic vocals, along with his and Ben Michon’s double guitar assault – mix in Kib’s growling bottom end from the bass, and Josh Klipstein’s thunderous drums, 4MAG NITROUS had found their distinct monstrous engine sound of crushing concrete, leaving every performance with only the smell of burnt rubber.

With many publishing endeavors in both TV and Film. 4MAG has licensed songs for the Discovery Channels hit show, ‘Monster Garage’ (Season 1 &2 – along with each seasons CD release), A&E’s series ‘Dog the Bounty Hunter’ and Lionsgate Films movie, ‘Wrong Side of Town’. 4MAG is played on radio stations worldwide and Sirius/XM radio. They have charted at #13 on the CMJ’s top hard rock bands. 4MAG has performed on nationally syndicated music television shows such as Louisiana Jukebox & SXSW Music Showcases.

4MAG NITROUS release their 3rd album – Electric Conception. With the release of a new album a new video for “Pillars of Strength” – 4MAG NITROUS is once again roaring out of the cosmos and onto the streets, running over everything in their way!

The journey to create Electric Conception was an uncompromising path in which we intentionally shifted gears to build a more aggressive sound. From the sucker punch driven chunk of the opening riff, the listener can hear a renaissance of the band. Pulse beats, rumblin’ bass and punchy articulated guitars provide the canvas for explosive vocals to run free. “Electric Conception” is an album we envisioned 4Mag heading towards while writing and recording. It exceeded all our expectations by being a massive sounding album. It fires on all cylinders and is so much fun to play live. The main adjective that I would use to describe it would be exciting, it sounds like a band with something to prove.  The energy is well captured and really shines on the playback.  If you don’t find yourself with your nose scrunched up and head bobbing along while listening, we’d be surprised.

I think ‘Electric Conception’ rebels against what has become standard in today’s Hard Rock & Metal, but still sounds new and familiar to heavy music. Refreshing has been the best compliment. In closing, the album is a Death March for those who don’t mind having blood on their boots!- 4MAG NITROUS

LÜT Release Their Most Personal Track Yet