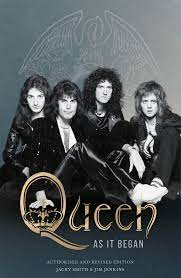 This revised and updated version of “Queen: As It Began” is a vibrant and highly entertaining introduction to the British legends’ storied career and legacy as well as their recorded outputs and the impact that they have had on fans and the wider cultural sphere in general. Containings heaps of interesting trivia and an abundance of funny anedotes, this well-composed book is full of warmth and enthusiasm, and there is obviously a lot of love for its subject matter present within its 390 pages. Smith and Jenkins provide a superb overview of the group’s creative peaks and valleys, their personal highs and lows, the gruelling tours, the solo works, and obviously the untime­ly and tragic death of Freddie Mercury.

The authors manage to cover a lot of ground without ever dwelling on one specific thing for too long, which is to say that it possesses a brisk pace, and I must say that I found it a refreshing and intere­sting read with my favorite parts being the chapters chronicling those magical early years and how the Queen phenomena came into existence. The tremendous amount of work the four lads and their management poured into this hugely inspired creation of theirs is nicely put into context and certainly leaves room for reflection and thought. On a side note, that Roger Taylor and Brian May’s solo ventures and offerings (especially the former’s work with The Cross) are covered and discussed to such an extent made me very happy indeed, and “As It Began” is packed with informa­tion yet it never feels utterly exhaustive (nor exhausting for that matter). As stated earlier on, this one is a well-crafted, passionately written, and inspired piece of work on one of the best and most outstanding bands known to man, and one can only hope that a sequel detailing the later eras with Paul Rodgers and Adam Lambert will see the light of day in the future.