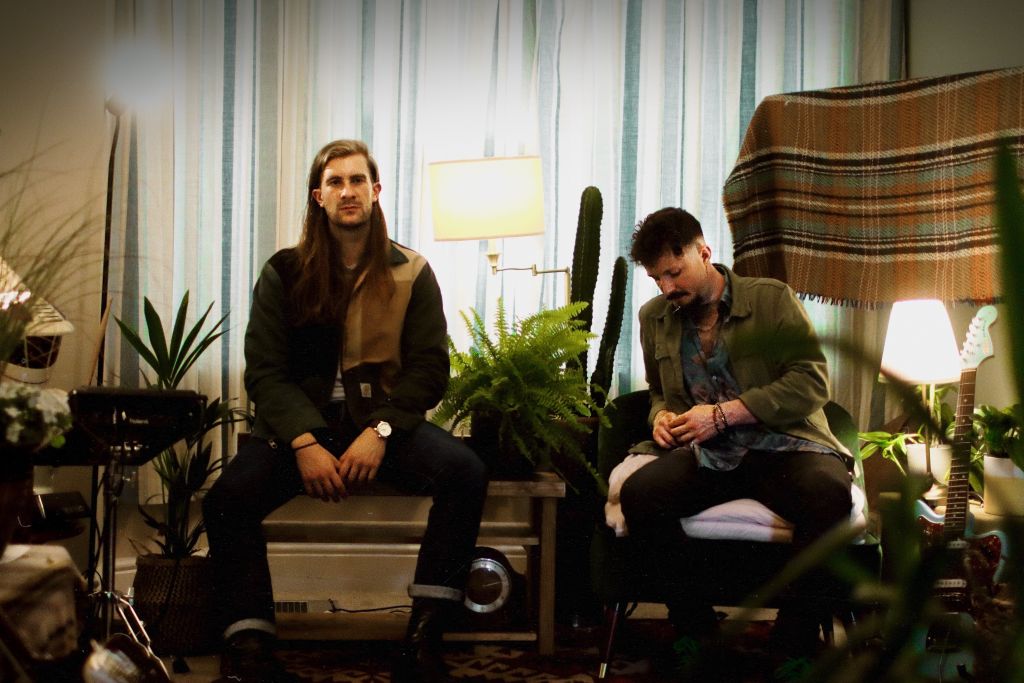 Stockport based indie pop/soul duo Slomo Casino’s sound is characterised by infatuate falsettos, breezy verses and catchy, wing-spreading choruses. But whilst their effervescent brand of Indie/Pop-Soul quickly charms and hooks, there’s also a resilience to their music. Jonny & Jack channel this feelingseamlessly through their next single release coming 18th March. A take on Bill Withers’ famous melody ‘Just the Two of Us’, with a gentle twist unique to the sweet sounds of Slomo Casino, the cover being their first offering since the success of debut EP ‘Marshmallow’ in Nov 21.
The pair met in Liverpool, forming a friendship after a particularly chaotic camping trip they shared together with friends. Embarking on an opening day, long forest-walk in rural France, the group were met with severe thunderstorms and torrential rain. They returned to their hired camper van a few hours later and realised to their horror that they’d left the van’s roof window wide open. Facing down a flooded van, as well as soaked belongings and instruments, Jack and Jonny bonded over the sheer calamity of the holiday.
Fast forward seven years and, between them, the pair have spent years supporting big name acts like The Libertines, Feeder and Mallory Knox, with their separate bands. Despite success with these projects, Jonny and Jack yearned for something else. Keen to make music closer to their hearts, they started afresh. What began as an exchange of drunken voice memos remotely slowly morphed into something tangible. Something unique, bright and, most importantly to them… something exciting.

What’s the hardest part about being a band in this day and age?
Lack of variety in service station meal deals

When did you realise that your project had the potential to be much more than just a fun idea?
We (Jonny vocals/guitar and Jack Drums) started the project when we were living in different cities, so all ideas were voice memos sent to each other remotely usually consisting of a melody of some descript after a few drinks. Once we’d collected a few of the ideas and built them up in Jonnys studio, we realised that it was exactly the kind of music that we’d been wanting to make for years and we had to do whatever it took to get it out!

Tell us about your latest release, why should we check it out?
Our take on ‘Just the Two of Us’, originally sung by the legendary Bill Withers. One a banger, always a banger… (we hope). Released on March 18th, this is the first of a couple of covers of our favourite songs we’re putting out with our own Casino twist.

How does a song typically come together for you?
We tend to put songs together as stripped back acoustic/vocal ideas as it’s just us two before building them up later in Jonny’s home studio. If it hits the feels with nothing but a vocal and a guitar – it’s got legs!

How would you describe your sound to an unfamiliar reader?
Happy, sensual and groovy

What do you want listeners to take away from listening to your band?
A spring in ones step and a glint in ones eye, ready to take on the day.
Japan, as it seems to us like the coolest place in the world. We just want an excuse to be a tourist!

How would you say that the sound of your band has progressed over the years?
As this is still a new project, our sound has been defined by our debut EP Marshmallow which came out in November, which is very much in the indie pop domain with a hint of soul. Although you can expect more soul to seep through with our next release as those influences seep though as we love the genre

How excited are you for 2022, and what can fans expect from you?
Although not very excited by current global events, music wise we’re bright eyed and bushy tailed about 2022, which after the release of some covers, we’re following up our debut EP Marshmallow with our second EP which will be coming to your ears later in 2k22. Which is being recorded as we speak.

TOMBS AND DEATH THROES – AN INTERVIEW WITH CORRODER