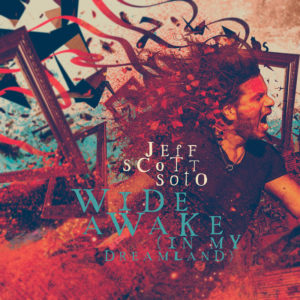 The talented Jeff Scott Soto’s latest solo record titled "Wide Awake (in My Dreamland)" consists of eleven melodic hard rock tunes that boast great hooks, big riffs, and even bigger choruses. Jeff’s ability to compose an infectious song is as prominent as ever here and this crisp, good-sounding LP is pretty damn solid all the way through with respect to quality and substance.

Soto´s voice is a perfect match for these semi-crunchy (and occasionally gritty) AOR/melodic rock pieces and there is a lot for the listener to enjoy here. Having said that, those massive, stadium-sized rockers capable of transporting you to an otherworldly realm consisting of hard-rocking bliss and pure ecstasy are missing here. This is a worthwhile listen for sure and it is always a treat to hear harmonies and melodies that are as memorable and wicked as they are here, and only a miserable sod would fail to see how awesome the epic album closer "Desperate" is, but all in all, "Wide Awake (in My Dreamland)" is neither sublime nor outstanding.

The second disc contains a live recording from Milan in 2019, and Mr. Soto and his band deliver an energetic and raw display of catchy rock ‘n’ roll with the funky "21st Century" and the heartfelt "Our Song" being highlights of the set. However, the sound of the crowd is more or less absent in places, which is slightly annoying as it could have added more atmosphere to the proceedings.

Jeff Scott Soto has done more musically adventurous and exciting things than this one, but make no mistake; "Wide Awake (in My Dreamland)" is a cool package and a consistently satisfying journey from beginning to end even though it never reaches stratospheric heights. Fans of W.E.T. definitely ought to check this one out.