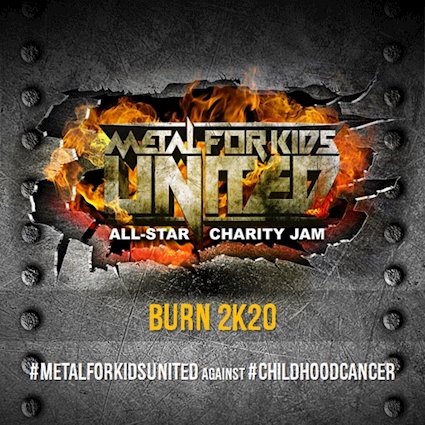 Monday 5 October 2020, METAL FOR KIDS UNITED! All-Star Charity Jam will celebrate its 5th Anniversary with the worldwide release of an all-star video jam tribute to the fathers of Heavy Metal. The final result is an extended version of Deep Purple’s classic Burn featuring 25 metal artists from around the world.

Italian benefit format Metal For Kids United! will support once again Peter Pan Association, a voluntary association helping children with cancer and their families since 1994 through free hospitality in Rome during care treatments at Child Jesus Hospital.
"Due to sudden spread of the Coronavirus pandemic, we were forced to cancel the 2020 edition of the annual benefit show booked in Rome for April. During the spring lockdown period we have asked old and new friends of Metal For Kids United to jam together from their own place to celebrate our V Anniversary and keep the promise made to the association" says Fabrizio Troiano, president of the Cultural Association "Metal For Kids United" and organizer of the event.

But the list includes also other well-known and internationally established Italian Heavy Metal/Rock musicians from bands like Doro, Extrema, Vision Divine, Labyrinth to name a few, reunited with the aim of raising awareness of children cancer and raising funds for voluntary associations which are striving to carry out their daily mission in such hard times.
By releasing the all-star video, the Cultural Association "Metal For Kids United" will make an initial donation of EUR 2.000 (approx. USD 2,300) in favor of Peter Pan Association to kick off and boost the fund raising campaign available on GoFundMe platform: gofundme.com/metal-for-kids-united-against-kids-cancer.

Rock and Metal lovers will have the chance to enjoy this Deep Purple’s classic in a new and contemporary rendition for free and will be invited to support the initiative with donations for the cause or by purchasing the merchandise.

Over EUR 12,000 have been donated to non-profit organizations working in Italy to help children in the 4 past editions.

Fabrizio Troiano further says: "We are very proud of the achievements over the years and we hope, despite the impossibility of making a physical event as in our tradition, we can once again share fun together, raise funds for the kids in need and give the chance to the people from all over the world to experience the Metal For Kids United! spirit of solidarity. Don’t forget to play it loud, make metal horns, headbang and share the video!"

ABOUT "ASSOCIAZIONE PETER PAN"
"The Great House of Peter Pan" is a free hospitality center that provides children with cancer, under treatment at the Child  Jesus pediatric hospital, with 32 housing units with facilities, as well as large common areas that encourage socialization among families. About 200 volunteers ensure that the structures operate 24 hours a day, 365 days a year. The most important project for the Association is to continue to support the maintaining costs of the Houses.
To know more: https://www.peterpanonlus.it

ABOUT "GOFUNDME" CAMPAIGN
Next to the Metal For Kids United! All-Star Charity Jam, a digital benefit campaign through the global GoFundMe platform has been set up to collect additional donations. This is another way to give the community of music lovers and philanthropists an opportunity to be an active part in this great solidarity event, especially those who cannot attend the show.
The campaign aims to reach EUR 15,000 within June 2021.
Donations can be done at gofundme.com/metal-for-kids-united-against-kids-cancer.