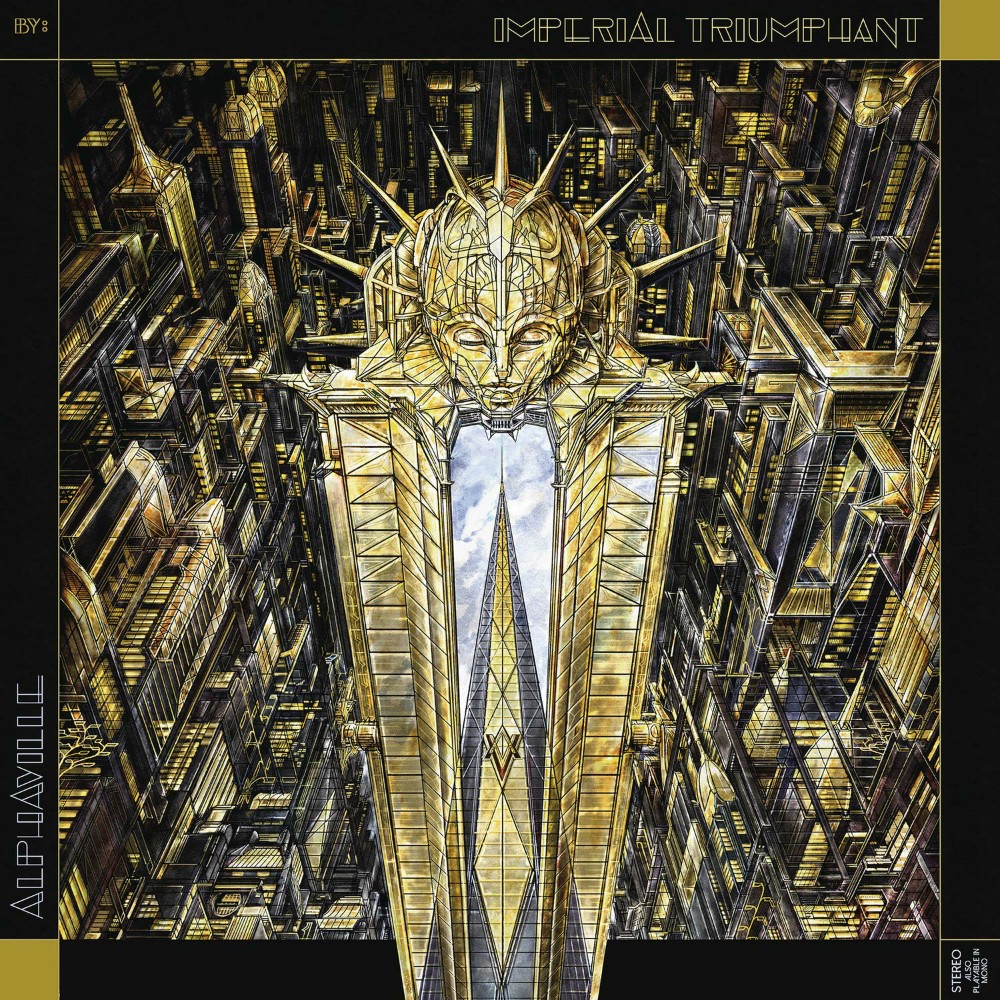 Are you absolutely certain that you’ve heard all that can be created in extreme metal? Are you positive you’re able to identify, classify, pigeonhole and label every form of electric madness?! Then you’ve probably never heard of these New Yorkers and their 4th opus, by many regarded as their finest hour. While one can clearly pre-label them Avantgarde Technical Black/Death Metal, once you give this true monster a proper listening you’ll starve for labels.

With their eponymous demo (2008), Imperial Triumphant, founded by Zachary Ilya Ezrin (vocals, guitars) in 2005, initially emulated black metal stylings of Deathspell Omega with a neoclassical spin, but the debut "Abominamentvm" (2012) and the addition of Kenny Grohowski (drums) brought in insanity and unpredictability of quickly changing rhythms, which "Abyssal Gods" (2015) further deepened and widened, Steve Blanco (bass, keyboards, piano, vocals), completing the lineup, whereby Immolation and Portal influences emerged, everything summarized, brutalized and overcrazed on "Vile Luxury" (2018), itself, apparently, a mere prelude to "Alphaville".

The main bullet point of their presentation is their love/hate relationship with New York City. With titles such as "City Swine" or "Rotted Futures" and their respective expositions it becomes abundantly clear that Robert Conrad "Lawrence Matthew Cardine" "Robb" Flynn (Machine Head) wasn’t overreacting when he described "this urban life" as "so volatile" he could not tell whether he lived in "an inner city or a concrete hell" ("A Thousand Lies", Burn My Eyes, Roadrunner Records, 1994). This same sentiment Imperial Triumphant makes flesh on "Alphaville", musically, bathing the already jazzy compositions in thicker jazz while recalling early Sadist and industrialized Morbid Angel (Rotted Futures), the black metal industrial arpeggios – Enslaved or melodic Voivod (Excelsior) and dissonant technical Gorguts (The Greater Good) as well as, unmistakably (kill me) mixing Korn or "Roots" Sepultura and Soulfly eponymous tuning with near-Opeth progressive melodiscism (title track), and, finally, pouring in some "Twin Peaks" Angelo Badalamenti (Atomic Age), which brings me to de facto, another important element of this vile vicious vision (to borrow from Acid Drinker’s 4th 1993 album title), namely, the vocals, which in here function like another instrument.

Sometimes the vocals are akin to Adam "Nergal" Darski’s on Behemoth’s "Demigod", absolutely over the top and downright demonic (Rotted Futures), other times they bring back the 1930’s or 1940’s (the end of "City Swine") or just sound so maniacal I was convinced it was a bona fide excorcism caught on tape (Transmission To Mercury). On that note of (seemingly) out of control insanity, three tracks (Atomic Age, Transmission To Mercury, Alphaville) create that impression of chaos on the verge of complete unravel and for that reason they are my favorites, although, truth be told, nothing compares to "Atomic Age" where the guitars seem LITERALLY explosive. I think Imperial Triumphant realizes the fellings of absolute horror their music inspires in the listener which is why there’s a German-accented shout "It’s Under Control!" at the end of the title track. Besides, they can utter some wickedly good accapella (Alphaville) and angelic background in the conclusion (The Greater Good) to calm the beating heart and the shattered nerves. There are still 2 covers: Experiment (Voivod) and Happy Home (The Residents), but I’ve listened to them only once and then ended every subsequent session after 7 tracks. They are, of course, brilliantly executed, but I don’t think they bring anything to the table the original tracks haven’t already brought.

"Alphaville" is a brilliantly planned, executed and powerfully recorded album of seemingly barely controlled extreme avantgarde chaos. I could have used more melody and hooks (thus the score) which then would not only draw the listener deeper but also give him or her a larger sense of terror but, for what it is, it is already stunning. Besides, there really isn’t anything like it out there. I recommend it for open-minded fans of experimental extremes.

RISING STEEL – Fight Them All

HELL IN THE CLUB – Hell of Fame