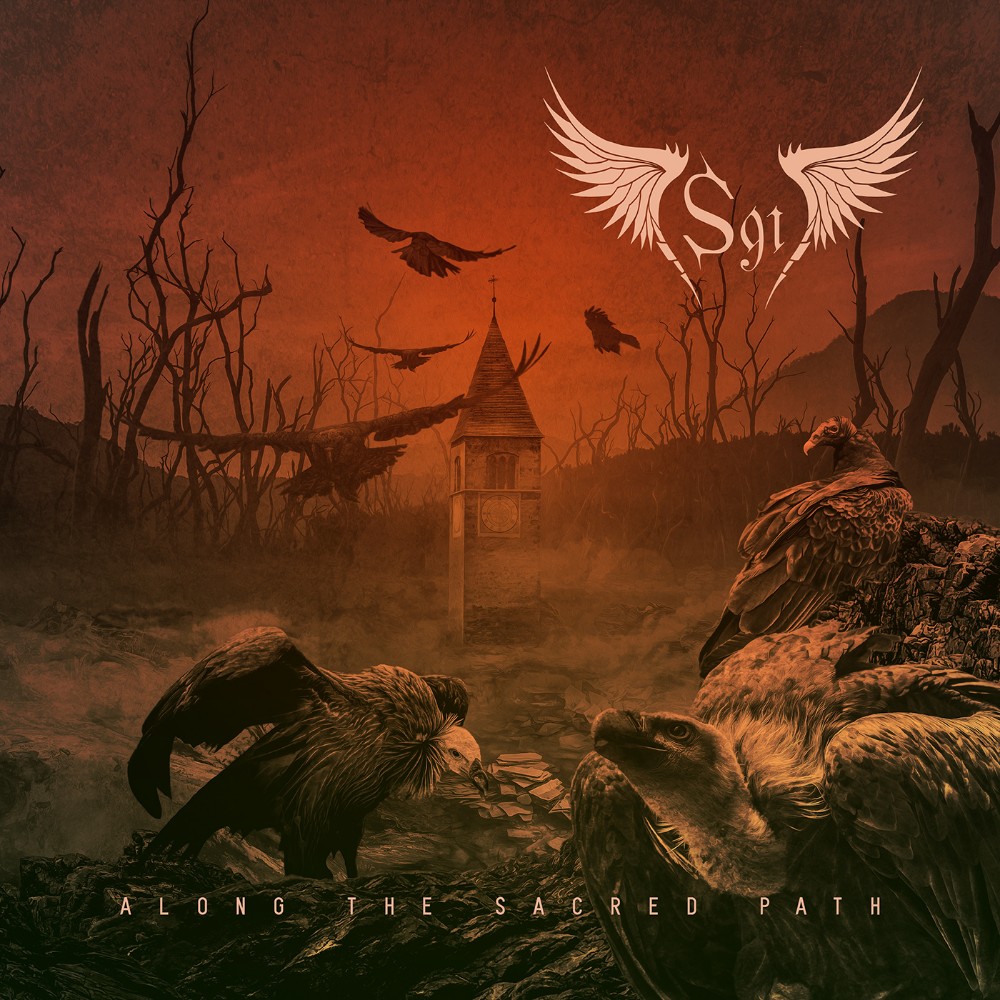 S91 – Along The Sacred Path

No matter how deep the divide between Roman Catholic Christianity and Protestant Christianity, and no matter how deep the divisions within the Protestant Church, there will always be those Christians who’ll seek to unite them all under one banner, seemingly oblivious to the reasons why the divisions formed and exist in the first place. Sometimes this spirit of ecumenia is even expressed through music, even more rarely through heavy metal, as in the case of this Italian progressive metal ensemble which formed in 2006 as Maria "Marì" Londino (lead vocals and "gregorian" chant), Francesco "Frank" Londino (keyboards), Francesco "Franz" Romeggini (guitars and "gregorian" chant), Giacomo "Jack" Manfredi (bass) and Giacomo "Giachi" Mezzetti (drums and speech), promoted by Asher Media Relations and Jon Asher.

S91 in the ecumenical spirit of modern liberal Christianity, seeks to unite the Protestants and Catholics under one Christian banner, additionally chiding Pentecostals for supposedly claiming "direct descendence from ancient Christianity". In their desire to unite all Christianity S91 members overlook one central problem with ecumenism: it does not seek to unite Christians under one banner but rather under one Roman Catholic Church, thanks to the initiative by Pope John Paul II who envisioned "the Protestant daughter" back under "the Mother Church". In practice, ecumenia seeks to have Protestants to deny Jesus Christ his sole primacy over the Christian Church, and, instead, accept the primacy of Virgin Mary, the Papacy and, return to the confessionals bearing constant guilt in their hearts and, most importantly, to participate in Eucharist, which Protestants find both unbiblical and downright blasphemous. Protestants are no more willing to embrace these things than are Catholics to forsake them. You’d have more success uniting Shia, Sunni, Kurd and Sufi Muslims under one crescent moon.

Whatever S91 attempts to discover they’ll do wisely remembering that there was once a famous man who attempted to unite Protestants and Catholics under one Christian banner, to undo Martin Luther, although, himself a Catholic, inspired by Luther, likewise an outspoken antisemite. That man was Adolf Hitler, in his own words (Passau Speech of 27 October 1928) "filled with a desire for Catholics and Protestants to discover one another in the deep distress of our own people" and that it will be Jesus Christ who alone will unite all his sheep under one Shepherd (John 10:16, REV).

Meanwhile, whatever their purpose, S91 are definitely both Christian and metal. Musically, their craft is tighter than Martin Luther’s 95 theses he nailed to the door of Wittenberg’s All Saints Church. While their roots are strongly, perhaps unavoidably, drawn from gothic metal such as Lacuna Coil or Delain, there’s considerable influence from Megadeth-ian/Overkill-ian thrash metal (John Williams, Dietrich Boehnhoffer) and melodeath (Saint Patrick) and even folk and power metal (Joan Of Arc), so it’s probably the fairest to call them a progressive metal band.

The 9th track affair is dedicated to 9 controversial figures of Christianity. Most scholars agree now that Constantine The Great’s conversion to Christianity was purely political and therefore its genuity in doubt. Interestingly, though, S91 picked pope Gregory I, whom reformer John Calvin called "the last good pope" and who did not claim the latter papal infallibility (like gods-Christians of the American Evangelicals) and even considered such titles as "universal bishop" the marks of the Antichrist. S91 wisely left out the murderer and inquisitor reformer, John Calvin, despite his ties to Luther. I can’t help but think that their approach is more of the rapper’s Tupac Shakur "only God can judge me" than sola gratia, and, interestingly, the hip hop beats, too, are present on "Along The Sacred Path", courtesy of Manfredi’s bass and Mezzetti’s drums (Olaf II Haraldsson) but they are presented in decidedly progressive sauce a’la Tool’s "Sober" (John Williams). Francesco "Franz" Romeggini comes up with some great riffs and melodies inspired by Into Eternity and Dream Theater with "Spine" Machine Head-ian solo work (Constantine The Great), "John Williams" echoying Megadeth’s "Truth Be Told" or Iron Maiden’ "The Number Of The Beast" driving "Godfrey Of Bouillon", whereas Frank’s keyboards tend to range from Marillion-ic to Van Halen-ic (Joan Of Arc). Finally, one track, purposely unmentioned so far in each regard, deserves its own paragraph and own paragraph it gets.

Definitely the most ambitious track, the longest one and the instant favorite is the closing "Dietrich Bonhoeffer". Not only does it concern one of my personal favorite characters in human history, a man who, opposing the blindness of German Christian leaders in embracing Adolf Hitler (not unlike the same kind embracing Trump today), he led the way by participating in a failed attempt on their fuehrer’s life, paying the highest price of a dissident. The song is also packed with multi-genre experimentation while encased in pure thrash metal of the highest order. The dynamic of melodeath, progressive Opeth-ian death, speedmetal and even doom a’la Swallow The Sun, join in with the thrash and Mari’s vocals, which become harsher and more forceful but not before the most ferocious staccato, where Giachi reigns supreme, spawns one of the most beautiful acoustic passage since Opeth’s "Still Life". "Dietrich Bonhoeffer" is progressive metal of the tallest order.

Seeing that the Italians are capable of such jaw-dropping musicianship and songcraft, I question their apparent inability to spread it consistently "Along The Sacred Path". The entirely acoustic mini-ballad, "Pope Gregory I", with keyboard atmospherics and choir effects recalling Enya or Clannad, not only brings nothing to the table but kills the momentum built up by the first two tracks, instead of being used in the middle of another long track. Even those first two tracks are of average quality, as if S91 was slowly unraveling, and, perhaps, that’s exactly what they intended in the first place. All of the above make this, admittedly fantastically produced "Sacred Path" sound a little disjointed and uneven.

If S91’s mission was to unite Christianity under one banner, "Along The Sacred Path" can certainly serve as their battle cry, but, for a band with 3 full lengths on their armor they should be more consistent, especially with such majestic pieces as "John Williams" and, especially "Dietrich Bonhoeffer" of their authorship. All things considered, I am already looking forward to their 4th installment, one where they can hopefully take on the Apostle Paul’s admonition: "Now I urge you, brothers and sisters, keep on the lookout for those who cause divisions and temptations to sin that are contrary to the doctrine that you learned. Stay away from them!" (Romans 16:17, REV)