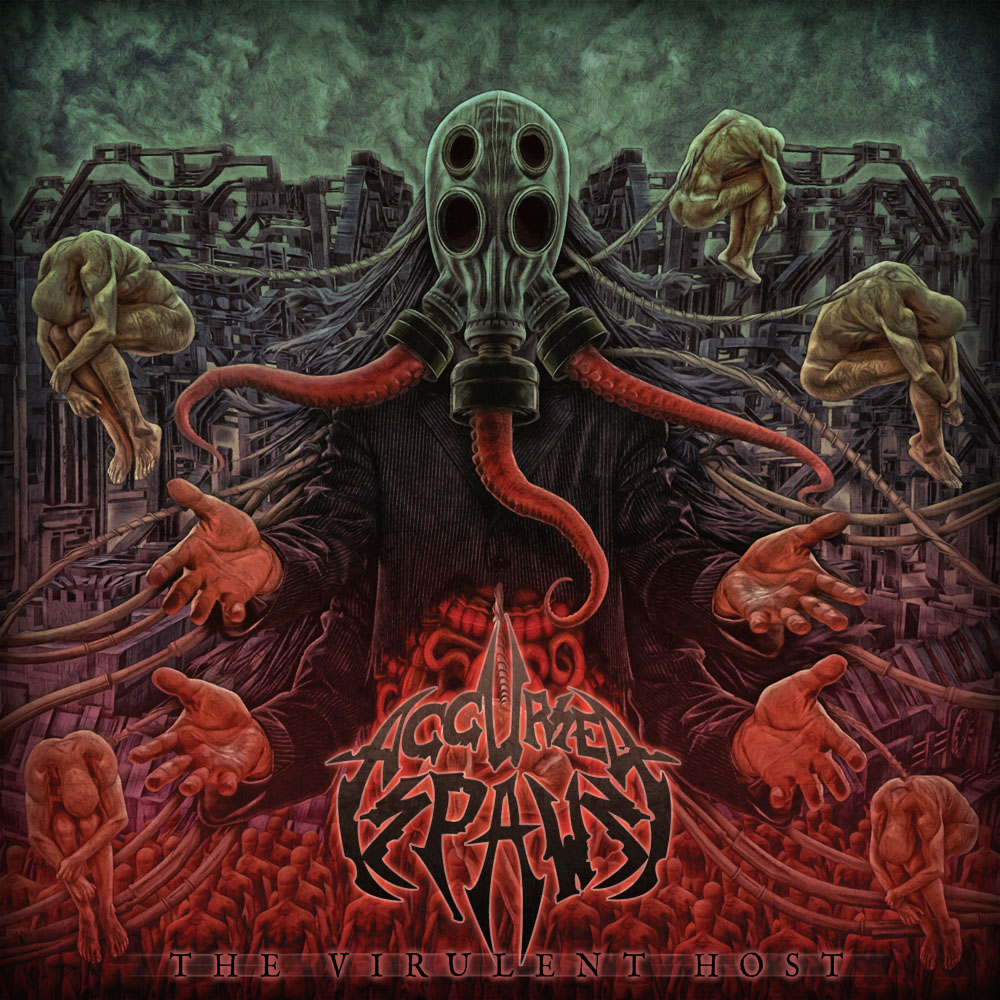 When you are a fairly new brutal death metal band you could go either of the two ways: 1. release an over the top brutally technical material and kill them all with shock and awe, or, 2. release a substantially brutal yet catchy material to signal the arrival of a new sheriff in town. The Canadian ensemble featuring two members of the gore death metal group, Mortör, Adam Pell (guitars, vocals) and Jay Cross (drums), along with guitarist Paul Kelly and bassist Weiyun Lu, have chosen the latter path since their inception (2010). Having released one demo and two EPs they are now ready to unleash their first LP, courtesy of Asher Media Relations/Jon Asher and PRC Music. What can they offer we have not already heard many times before?

Accursed Spawn may not stylistically bring anything new to the table: brutal but catchy technical gore-themed yet politically charged technical death metal in the vein of Suffocation and Dying Fetus (Dogmatic Affliction), Morbid Angel (Cesium 137, Shotgun Facelift), Cannibal Corpse with a touch of Chimaira (Bloodforged) and even black metal (title track). The production is devastating, Pell/Kelly guitars sound like literal AK47’s competing with M16A2’s, deafening Lu’s bass accompanying the "cover them ‘taters with coal in grandpa’s dilapidated basement" Cross’ pummeling assault on all senses sometimes called percussion, with Pell’s roaring now John Gallagher (Dying Fetus) and Hernan "Eddie" Hermida (All Shall Perish) devouring each other for brunch. The tracks are an average length, packed with catchy riffs, twists and turns, never spending too much time in one place, invoking fair degree of memorability in the listener. Were it so for all 9 tracks, this would be the penultimate paragraph of this review. But it is not so.

For reasons known only to Accursed Spawn members, there are three tracks that stand out right from the first exposure as brutal but brilliantly mememorably incredibly coherent pieces of death metal that falls somewhere between the best Misery Index, Revocation and All Shall Perish has on offer. There is suddenly melody, repeated infectious riffs, repeated choruses, harmony, balance and, despite the aforementioned influences, fierce originality. The excellent "Interrogated Bludgeonment" even marries all that to unmistakably classic Testament thrash for great measure, while "Cesium 137" exhibits the best concoction of melody and hooks on the album, with "Dogmatic Affliction", impressive to a slightly lesser degree, but admirably reminding Suffocation they could be dethroned if they’re not careful. The strength of these three tracks is why I decided to elevate the score to 4.5.

Accursed Spawn is a fairly new band on the market and they clearly have some trouble maintaining consistent level of songcraft throughout their debut album, but if the three aforementioned standouts are any indication, they have the chops to compete with the best and the baddest in the business. Good luck.

S91 – Along The Sacred Path