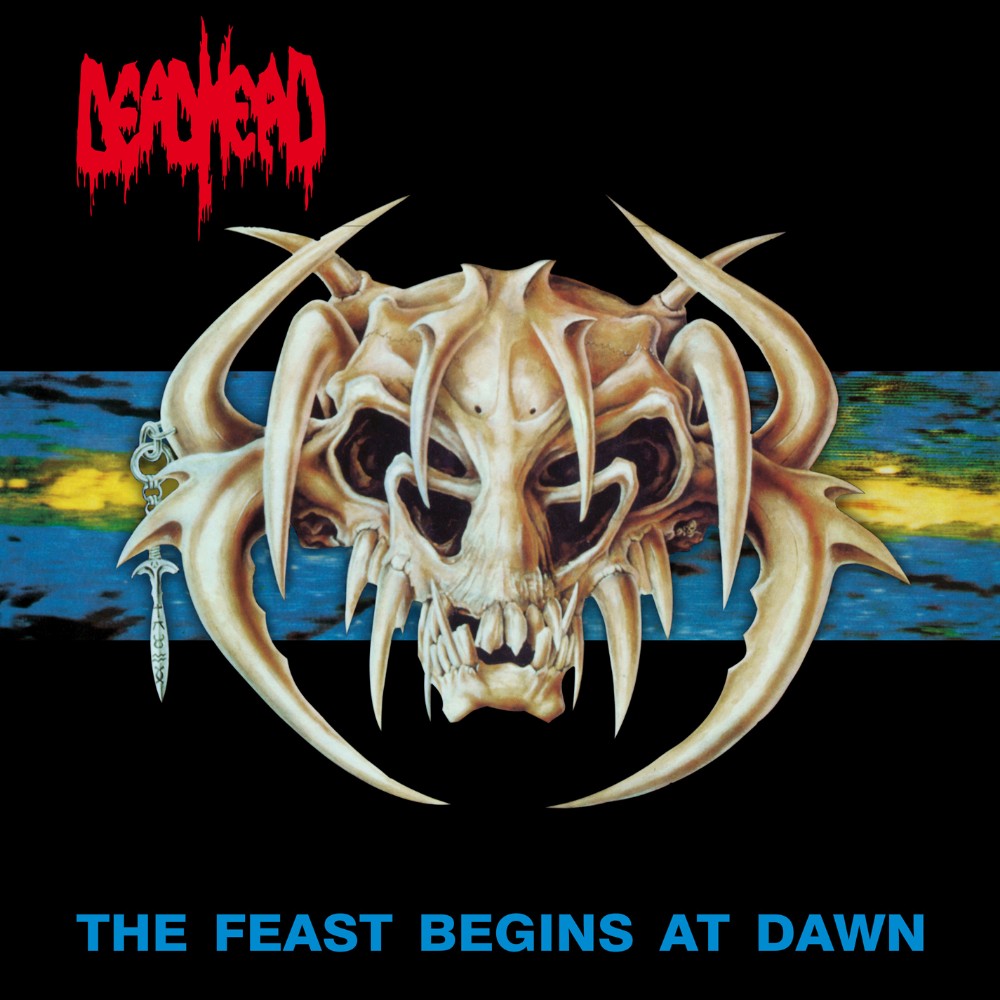 One can argue after Encyclopedia Metallum that the Dutch aggressive thrash metal outfit (as they prefer being called), are actually death/thrash with the group’s own bandcamp labeling them "as aggressive as thrash can logically get before having to refer to them as death metal", but that argument could equally apply to Slayer, Death and old Sepultura so go figure on your own. Whether aggressive thrash or death/thrash, after three demos and two splits Dead Head, which formed in 1989, released their debut album "The Feast Begins At Dawn" (1991) as Tom van Dijk (bass, vocals), guitarists Ronnie Vanderwey and Robbie Woning and Hans Spijker (drums). By the band’s own admission, the debut had only one flaw: bad production. Accordingly, Hammerheart Records released a remastered version this year, as a 2 CD deal.

The aforementioned four demos have varied production, the best for "The Festering" and the worst for the label demo, each demo containing some tracks re-recorded and later remastered for the LP and 5 tracks which never made it onto the debut: "Sawn In Two (Hooks of Hemorrhage)", "From Belial – Reprise" (The Festering), "I, Tormentor" (Metal In Rocks II), "The Wicked" (From Belial) and "The Road Not Taken" (From Belial). The label demo does not contain any extra LP material. Listening to the lower quality demos makes you really appreciate the remasters so let’s consider only the off-LP (extra) tracks.

"Sawn In Two (Hooks of Hemorrhage)" generally fits with the rest of the 2nd CD material, solid "Pleasure To Kill/Terrible Certainty" Kreator worship, despite some, indeed, almost death metal riffs. Now, why do bands do reprises of the same track (From Belial) for a separate 2 minutes or so, instead of combining the two into one track, I’ll never know, but it’s the only extra track rightfully an extra. "I, Tormentor", built on a peculiar technical guitar riff a’la Iron Maiden’s "Wasted Years" but with pulverizing thrash riffs, is faster than anything on "Pleasure To Kill", while "The Wicked" wields some Black Sabbath-ian and Mercyful Fate-ian riffs with blistering thrash in between, and "The Road Not Taken" recalls Sepultura’s classic "Beneath The Remains". With the exception of "From Belial (Reprise)", it’s really too bad that extra tracks didn’t make it on the full LP. Overall, the entire 2nd CD earns a 4.5/6 score.

The main course of this release is, of course, CD1, the remastered version of "The Feast Begins At Dawn", and it sounds fantastic. Because of the remarkable remastering job, an album that sounds heavily antiquated on the original demos can easily stand in line with modern productions of Evile or Warmaster. Most importantly, though, you can appreciate how Dead Head were pioneers of the modern thrash and how nuanced this debut material was/is. Take the first four Slayer albums, Kreator’s "Pleasure To Kill", "Terrible Certainty" and "Extreme Aggression" as well as Sepultura’s "Beneath The Remains", Metallica’s "Creeping Death" (Slay Your Kind), and last but not least, Death’s first three albums (From Belial), all to a vicious demented vocal amalgamate: part Tom Araya (Slayer), part Miland "Mille" Petrozza (Kreator), part Chuck Schuldiner (Death). Now, mix well and SPEED IT UP, yes, whatever speed you arrive at, double and triple it, making "Raining Blood" (the song) sound like Black Flag’s "My War" (a great song in its own right) in comparison. The power and energy of this material simply no one can deny. But that is not what necessarily makes Dead Head unique in October 1991, when this album came out.

What makes Tom Van Dijk and Co. unique is the incredible way they anticipate what will happen in thrash, death and even black metal in a few years. Take the favorite (the band’s own and mine) "In Your Room", with tasty guitarwork foreshadowing Monstrosity’s "Firestorm" (created 17 years later!). You could technically explain the similarity of "Saved By Science" and "The Festering" to Death’s "Suicide Machine" (same month of release as "Human") but what about the supershort instrumental "Below The Earth" and the deathy thrash of "Pesticide", both containing Individual Thought Patterns you won’t hear on a Death album for another 2 years? Perhaps you’d like to explain how the black metallic instrumental "The Tribulation" sounds as if Emperor’s "Alsvartr (The Oath)" (6 years before release) ate Hypocrisy’s "The Arrival Of The Demons" (3 years before release), or are you suggesting 12 year old Adam "Nergal" Darski guest played the main riff in "Desolate The Shining" he later used on Behemoth’s "Zos Kia Cultus"? In the end, "Feast" is a primary example of why production is paramount to the album’s success, Dead Head clearly ahead of the pack already on their debut and missing out on the rightful credit.

Now, just because 5 (In Your Room, Below The Earth, Slay Your Kind, Pesticide, The Festering) out of 12 tracks are perfect 6’s does not mean the whole LP is, and neither should it be, being a debut, after all. "From Belial" is so progressive and ambitious it goes too many places at once giving an impression of incoherent and haphazard songwriting, the parts greater than their sum. The "Peace Sells" Megadeth-ian instrumental opener "Untergang Des Abendlandes" (Downfall Of The West), while musically impressive is an akward transitition to "Saved By Science", which might as well have been the opener itself, and the latter along with "Desolate The Shining" sound like progressive revelation to the fantastic "In Your Room" instead of standing on their own.

All of the above flaws do not merit more than a 1 point deduction so "Feast" gets a 5/6 score. Combining that with the 4.5/6 for the demo 2nd CD score I arrived with a 4.75/6 total, and, taking into account fantastic production on the remaster as well as overall pioneeering and groundbreaking ideas on both discs which they never got a proper credit for, I easily awarded the entire effort a 5/6 score.

Rarely have I heard such a punishing maddeningly fast thrash metal. Death Angel’s "Darkness Descends", Kreator’s "Pleasure To Kill", Slayer’s "Reign In Blood" and Sepultura’s magnifiscent "Beneath The Remains" all come close, but none reaches that intensity while offering such twists and turns, ebbs and flows while sounding, despite many influences, so fiercely original and innovative. They don’t make them like this anymore, no, not in this genre.