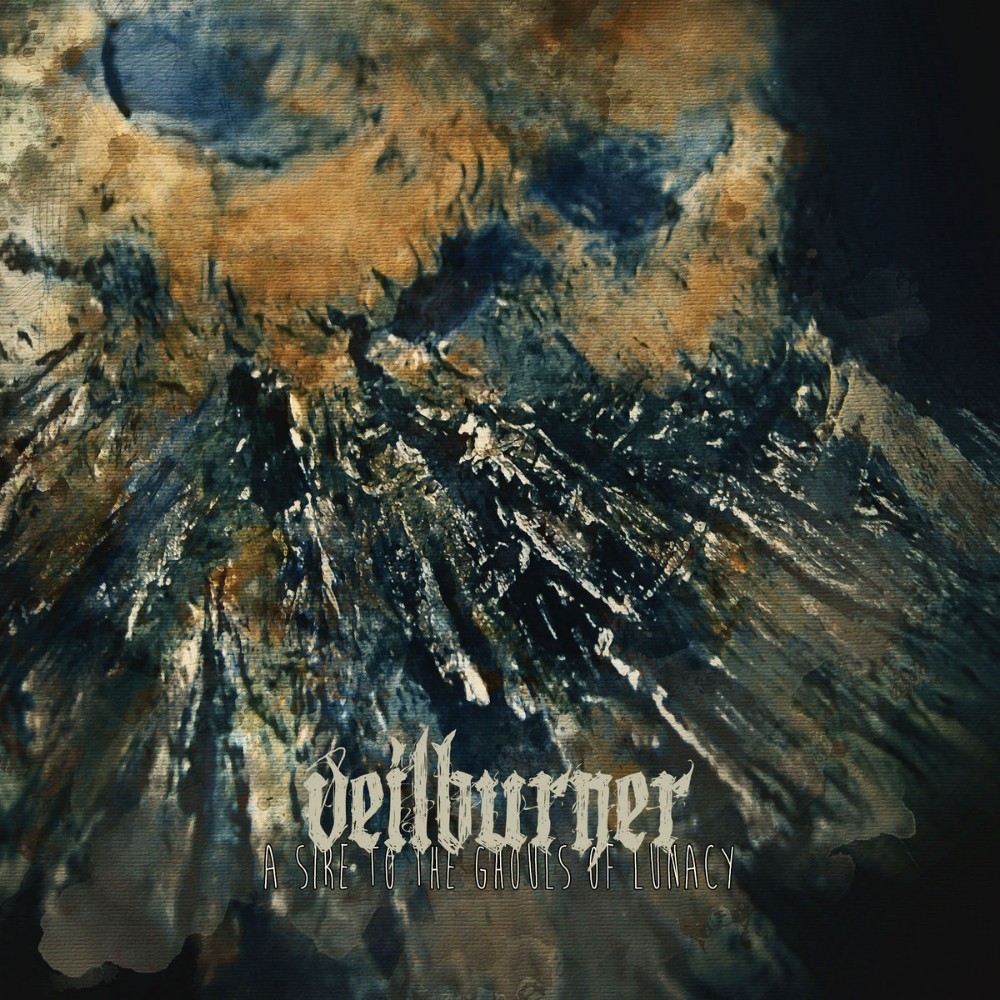 VEILBURNER – A Sire To The Ghouls Of Lunacy

Veilburner is a fairly new creation, alive since 2014, howbeit a very prolific one, "A Sire To The Ghouls Of Lunacy" their fourth in 4 years. Enlisted in this ghoul lunacy are just two men: backing vocalist and all-instrumentalist Mephisto Deleterio (surely his real name), and main vocalist Chris "Chrisom Infernium" Sheppard.

Veilburner. The name reminds me of the temple veil which separated the general assembly area of the Jerusalem temple courts from the Holy Of Holies (Exodus 26:31-33), where only Levitical High Priest was allowed and only once a year (Hebrews 9:7), the veil torn when Christ died on the cross (Matthew 27:51). But that veil was TORN not burned. Clearly, then, the veil has a more esoteric meaning for the Pennsylvanian black/death outfit.

According to the label, Veilburner’s preceding 3 records were a trilogy on the subject of transhumanism, which both fits the esoteric meaning of the group’s name as well as the Biblical reference, since they both echo the cry at the heart of every spiritual philosophy: to remove mankind from its pathetic status of fragile jars of clay elevating itself into eternity. For this purpose, the mortal flesh would have to attain immortality, and, indeed, such a quest concerns Veilburner’s "A Sire To The Ghouls Of Lunacy". Whereas the Bible shows the divinity relieving mankind of the task (1 Corinthians 15:50-53), Veilburner esoteric two characters attempt to attain it through strange experiments. Does the music fit this concept?

If the concept is alchemic wizzards trying to attain immortality through shady strange experiments and failing miserably then the music matches the that concept perfectly. Although the lyrics came with the promo, they are largely indecipherable for reasons only known to Veilburner. From what I managed to decipher and comprehend I gathered that these experiments, true to the human condition and summary of human endeavor, not only have failed miserably but actually propelled the protagonists into abyssess of suffering, a clear nod to Clive Barker’s "Hellraiser", especially given the images in the booklet. It seems that these characters while yearning to escape from their fallible and flammable carbon abode called flesh, where "suffering foreshadows the present in continuance of replicating the past always measuring the distance between faith and fate" (Introvertovoid), in the process of pursuing a more excellent way were trapped by spiritual forces the powers of which they could not fathom in a dimension of perpetual spiritual torment. Thus Veilburner warns in a traditional Black Sabbath/DIO fashion echoeing Morbid Angel’s "Nothing But Fear" with "consequence… now the panic comes/you’ve dabbled in magic your fingers are burned/lost as you run towards the light/and deep in your heart you have nothing but fear". In short, transhumanism does work just not necessarily in the way intended by the experimenter.

Each of the eight opuses that comprise "A Sire To The Ghouls Of Lunacy" is a further step into the abyss from which there is no return. The material is truly varied, basically either deathened black or blackened death depending on individual perception, with industrial, doom and even some morbid electronics thrown in for good measure, Mephisto Deleterio and Chrisom Infernium masterful composers with compositions so uniquely sounding the band references I make further are vague at best. Of the eight tracks I find half to be of perfect as well as of very memorable constitution, two near-perfect in this regard and two that seem too chaotic and too extreme to really wrap my mind around. Needless to say, the production and instrumentation as well as performances are top notch and I have zero complaints in those terms.

To the good, the favorite "Panoramic Phantoms" rides on processed Soulfly’s "No Hope No Fear" riff turned almost sludge until the excellent doom melody at 2:30 mark revisits Emperor’s "Thus Spake The Nightspirit" with an even better clean vocal for the most memorable climax on the album, while the electronically Dimmu Borgir-ian very melodic dirge "Glory Glory Grotesque" mixes Fear Factory’s "Self Bias Resistor" with latter Death on the basis of Pink Floyd’s "Darkside Of The Moon". "Upstream And Parallel", which starts with very technical death riffing, is where I barely can make reference anymore (Hypocrisy? Immolation?) until 2:30 mark where a fantastic sitar/acoustic+power chord riff recalls PL "I Am Nothing" but almost in a folkish fashion while even more vividly referencing Pink Floyd’s psychedelic "Time" from the aforementioned classic. The closer truly worthy of its position on the disc, "Where Torment Has Danced Before", is another amalgamate of seemingly ill-fitting sounds – Voivod-ic at the onset with Type’O’Negative melody and The Doors-ian keyboard background allowing for an excellent Gregor McIntosh (Paradise Lost) solo, ushering Sadist dissonance between Soulfly riffs and Machine Head’s "Davidian" on simultaneous speed and crack, as it all gets faster and faster, more and more extreme, for climax that evokes shadowy figures who hauled off Patrick Swayze’s traitor friend in the movie "Ghost" right before your third eye.

With half of this disc so fantastic that the only thing you can throw at it are your loving arms, it’s dissapointing to see and hear "Agony On Repeat" and the title track revealed as excesses of over the top extreme chaotic brutality. Perhaps credit could be given to the former taking the most extreme parts of Opeth’s "Still Life", Ulcerate and Arcturus while adorning it with Nile-istic power and the latter’s Deatspell Omega-ian dissonance magnified, but the two are just slightly above my tolerance for noise of this constant intensity and length (both over 6 minutes). Lastly, "Abbatoir Noir", which heavily references Dark Tranquillity’s "Auction" could have been so much better with just a little more work, although its mellow and shapeless nature may be due to the purpose of separating the two aforementioned extremities, so, I realize I can’t have it both ways. Plus, some perceived flaws just show where the material could really shine next time around.

Veilburner is a very very original band with superb compositional skills but these phenomenal musicians and composers seemingly have a hard time maintaining the intensity and consistency in songwriting whereby arresting the attention of fickle and attention deficient gents like me who can’t play any intrument while a moderately competent singer. For these reasons I encourage Veilburner to diversify each track even further on the next effort and you, the receiver, to check out this incredible work of art.