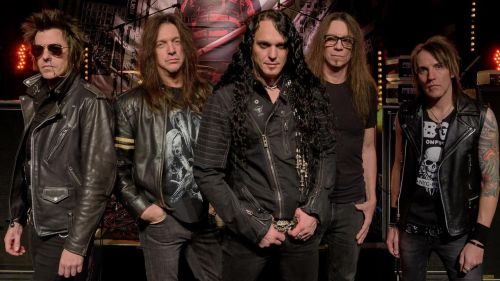 This past Saturday turned out to be great fucking day to be in London as the legendary Skid Row were headlining the O2 Forum in Kentish Town. Not only were the New Jersey hard rockers awe-inspiring to behold in front of two thousand British maniacs, but they had four bands supporting them including the highly energetic Swedish outfits Backyard Babies and H.E.A.T. Read on, folks.

First up were KilliT and they certainly gave it their all, but even though these guys are competent musicians, their song material came across as somewhat mundane and forgettable. Again, their performance lacked neither energy nor passion on the part of the band, but one was left with the feeling of having listened to their tunes a million times before.

Next up were Vega and as with KilliT, they displayed a huge amount of energy as well as determination, but the songs were a bit of a mixed bag; some were occasionally exciting while others simply lacked charisma and character. Regardless of that, the crowd dug the band and they deserve kudos for evoking a proper rock ‘n’ roll atmosphere inside the venue.

H.E.A.T blew everybody away and were insanely fun to watch and listen to. Spearheaded by frontman Erik Gronwall, this ensemble is all about rocking the fuck out and blowing its fans to smithereens by means of adrenaline-fueled anthems with power and ballast to them. Fun, thrilling, and exciting, H.E.A.T deliver crazy rock ‘n’ roll mayhem and how can one deny such charming tunes as “Bastard of Society” and “A Shot at Redemption”?

Veteran outfit Backyard Babies delivered a tight and focused performance with a strong and varied set list to it. These cool dudes may not be the most intense experience out there, but they sure do handle things professionally and you can tell that they have been at it for countless years. Skilled musicianship coupled with well-written song material and there you have it; an enthusiastic show by an underrated band that know perfectly well what it takes to thrill the audience.

The hard-hitting force that is Skid Row were firing on all cylinders and pretty much exploded in our faces the very second they went on stage and launched into the epic “Slave to the Grind” title track. Simply put, they hit the stage like a hurricane and never looked back. Skid Row have it all in my opinion; confidence, swagger, attitude, charm, and they know how to put together a stellar set list that reeks of timeless songs and greatness. People loved every second of the gig and there were plenty of highlights including “Psycho Love”, “18 and Life”, and “Monkey Business”, just to list a few examples. We are talking rumbling hard rock performed with class and aggression, and vocalist ZP Theart is right up there with the best of them. Following the main set, which kept us all engaged and entertained throughout, we were served a handful of blistering encores that all ruled, especially “Get the Fuck Out” and show closer “Youth Gone Wild”. A highly memorable concert that was as inspiring as it was electrifying. Make sure you catch these guys on tour somewhere near you.