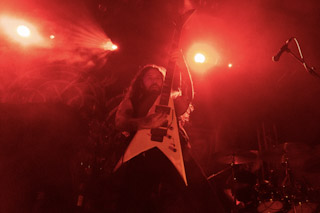 Having seen both Behemoth and At the Gates previously I was really curious and looking forward to see Wolves in the Throne Room because it is a band that is pretty well established in the atmospheric Black Metal subgenre. The band in itself is a pretty good example of what the subgenre is all about and how it has developed throughout the decades. The first albums have a pretty distinctive norwegian influence and the atmospheric soundscapes are clearly akin to those you’d expect of Burzum and at times it can be pretty gloomy melodious like Dimmu Borgir’s Stormblåst. Later in their career we can see the influence of post BM. The last album called Thrice Woven from which they played some songs like Angrboda, The Old Ones Are With Us, Born from the Serpents Eye. I consider this album to be the epitome of their career so far. They have achieved a pretty subtle and well balanced atmosphere that translates pretty well live and it is absolutely enjoyable and made the concert a memorable experience.

When it comes to this subgenre, there is always a risk for atmospheric bands to not to be able to recreate certain features live. At times this ambience comes in an organic way, rather than an artificial one, and this certainly seems to be the way Wolves in the Throne Room does it because it shows live. I’m really fond of these live atmospherical experiences. When it comes to both image and other props WITTR opt for a pretty practical and simple image. Pretty american really. But who needs props when you can actually deliver on stage, right? When it comes to rituals so I saw them using sage, which it may not seem impressive to the untrained eye. Nonetheless it has a spiritual and ritualistic connection for many and it evokes the right associations.

AT THE GATES live at Rockefeller, Oslo
Photo by Silje Storm Drabitius

At the Gates is pretty much the one band I really know that I will always have fun seeing because that melody is just so energetic. I could see classics like Slaughter of the Soul, Suicide Nation, The Night Eternal repeatedly without ever growing tired. Now I got the opportunity to experience live songs from their latest album like To Drink from the Night Itself which is pretty much old style oriented but with a guitar work so refined and a paradise for us who love harmonics and pretty much beautiful and well accomplished melody. At the Gates fulfills all expectations every time. It’s like it will always invigorate you, no matter if it’s in the middle of a dark winter. It was cool to listen to the intro from El Altar del Dios Desconocido which is a quote taken from an argentinian writer. It is a rather existencialistic quote and well reflects that other side of At the Gates’ music , the introspective, melancholic style that at times makes you rather pensive and introspective.

When it comes to Behemoth, the concert was centered primarily on the new album. I find it to be pretty blackened and highly technical. The entire show that stands out as being by far the most impressive visually that night. Behemoth’s scene presence is always powerful. This time around, the visual concept and lights seem to be arranged in such manner as to render it pretty artistic. The choice of video clips that well are not limited to abstract or abhorrent images metal style, but give different impressions. The visual concept can be exemplified by the video Bartzabel which is pretty artsy and well done (in a world of pretty bad metal videos), Many comment the choice of adornment from Nergal’s part, the pope-like hat, and yeah it is meant as mockery so it should be precisely as extravagant as it is in order to create that particular effect. So yeah I was pretty impressed by the artistic input, symbols and high concepts. Especially if one takes into account the last big festival I saw in Finland included two heavy metal vocalists in their underwear with shiny upside down crosses embroidered on said underwear. Anyway Behemoth is pretty high cultural nowadays and it is refreshing. I remember particularly the cossack like dancers which pretty much show how mature and how wide the influences of Behemoth are these days. They have been around for a while and know how to deliver an absolutely professional show. Musically the new album is impressive as well and the live performance of songs like Wolves ov Siberia which is pretty top notch were absolutely delightful, except of course for the children choirs that opened the whole concert. I’d sell my soul to the devil to see this annoying trend to stop. Anyway I Loved You at Your Darkest, their latest album, brings some rather crushing songs (fans of Anaal Nathrakh will be delighted) but it has other rather mellow songs like Bartzabel as well.

It was a pretty good night with the awesome atmosphere of Wolves in the Throne Room, the both energetic and melancholic and always excellent At the Gates and the rather impressive and super professional Behemoth show!