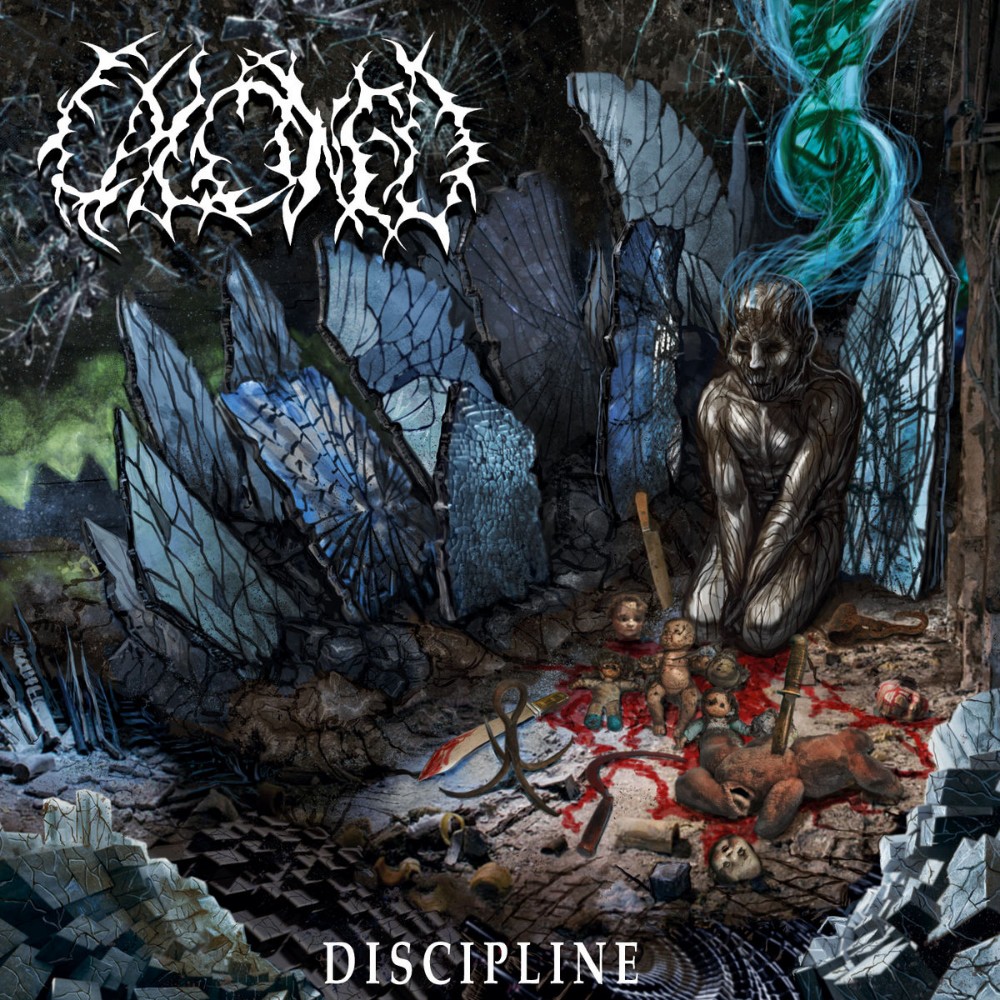 This Swiss brutal death metal band was born in 2008 and, a year later, independently produced a demo "4th Degree Burns", followed by "Thwarted" EP (2009), neither of which secured them a label. Finally, Calcined as Simon Piffeux (bass, backing vocals), Lionel (drums), Florian "Magnus" Jacot-Descombes (vocals) and Jéjé (guitar) signed a deal with Great Dane Records thereby releasing the debut album "Tormenting Attractions" (2015), an insane and chaotic but cogent and groovy fairly original Cryptopsy-ic early Death mix. A year later, Jéjé left and was replaced by Jack with whom the band recorded this here, "Discipline". Is "Discipline" every bit as good as the predecessor or better?

"Discipline" is neither as good as "Tormenting Attractions" or better. I used to think that metal could not be so brutal and extreme that it would be barely listenable but I was wrong. There is, it turns out, such a thing as too much brutality and chaos in metal music. I am reminded of Brutal Truth albums, but I thought I was just impatient with those. With "Discipline" I don’t think, I KNOW I am making a gargantuan effort to stay with the pain that listening to this album causes and that, as a result, my willpower is stretched to the limits. You thought you heard brutal and insane fans of Hate Eternal’s "Fury And Flames"? Listen to "Long Horn" then think again. Melody is for the patient of ear and scarce as water in a desert. No, you don’t get groove, harmony and melody in a manner you are so used to getting, my fine feathered maniac. You get constant, incessant and truly merciless barrage of grinding pounding interspersed with cool riffs any of which you might miss if you’re not paying attention. "Crown Of Mercy"? You’d get more mercy out of Moses as a Midianite (Numbers 31:15-18)

To describe the sound of total chaos with no regard for law and order in the universe let’s establish some coordinates for even nothingness cannot exist on its own. Hate Eternal’s "Fury And Flames", Cryptopsy’s "And Then You’ll Beg" and Gorguts "Colored Sands" are points of some reference here. But imagine the first and the third played backwards with simultaneous normal Gorguts playback while a schizophrenic homicidal zombie that used to be Mark Barney Greenwood (Napalm Death) is yelling, growling, hurling, chocking at a top of his lungs without rhyme or reason independently of whatever musical background (Sit On The Mount Of Fire) Most tracks being barely decipherable and no, not for bad production for that is excellent, but for intented effect of being buried alive under so many familiar sounds you are not allowed to enjoy for more than a few seconds until the next Mike Tyson punch splits your brain asunder, it was extremely hard to choose "favorites" but lo! I succeeded!

First, let’s define favorites exclusively in this particular review. I do not mean tracks I actually loved or even liked. I mean tracks that exhibit the most potential for being actual songs when the’re not trying to make Kajagoogoo’s "Too Shy" chorus into a death metal riff (Nod). From this perspective, I definitely would list the closer "Tormenting Attractions" (yes, they named the song after their previous album having not a title track on that album, Paradise Lost did the same thing with "Shades Of God"). The track having the most cohesion, truckloads of decent riffs and (dare I say it?) actual brief melodies, I’d list secondary "Sit On The Mount Of Fire", and finally, to a lesser extent, "Morbid Pulse", all three of which clear nods to first three Death albums, no surprise, since Calcined did a split with Regicide Decease "Death Illumination – In Memory Of Evil Chuck" (2012). Accordingly, I was going to give this a 3.5/6 score but the fact that I have no desire whatsoever to be "Displine"d ever again cost them half a point.

Whereas they had a good thing with "Tormenting Attractions" Calcined went overkill with "Discipline" for unknown reasons. Just because Pantera after "Vulgar Display Of Power" was "Far Beyond Driven" into success (No. 1 on Billboard in 1994) does not mean anyone who brutalizes their carnage will likewise succeed. To borrow from Ministry’s subtitle to "Psalm 69", there’s a way to succeed and the way to suck eggs. With "Discipline" Calcined chose the latter.