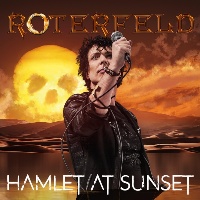 Roterfeld, formed in 2011, is a dark rock/alternative pop project of Austrian vocalist and guitarist Aaron Roterfeld. The debut album "Blood Diamond Romance" made serious chart waves in Germany (No. 2), Aaron compared to the likes of David Bowie, and the single ""Great New Life" was selected for the film "The Twilight Saga: Breaking Dawn – Part 1"…and then Roterfeld disappeared for 7 years. Given that the label promises that this here follow up is "more multifaceted and playful than ever before" does "Hamlet At Sunset" rectify the years of wait for the fans?

The answer is an emphatic yes and then some. Interestingly, the album is split between dark goth rock that recalls late 90s/early 2000’s Paradise Lost and synthpop of Depeche Mode. "No Friend Of Mine" is verse heavy David Bowie ("I don’t give a damn") with a very catchy chorus that recalls In Flames "Deliver Us" (Sounds Of The Playground Fading), lyrically, though, one of the most scathing indictments of human character (some kill with guns, some use a knife, some kill with guns, you use your life), while "Bring Your Own Star To Life" (featuring synths straight from Paradise Lost "Host") and the deeply soulful hopeful romantic "I Want More" are closer to Type O’Negative, Roterfeld’s vocals oscillating between Peter "Steele" Ratajczyk and clean Nick Holmes (Paradise Lost), if they both had heavy Austrian accents, of course. In the German sung "Flieg", provided my command of the language is still intact, Roterfeld claims it’s "not too late to follow your own luck" atop Depeche Mode’s "Playing The Angel" rhythm. The slightly punkish Marylin Manson-ic "Black Blood" signals a slight downgrade in songcraft somewhat redeemed by Elvis Presley-an "King Of This Land" with synths recalling Michael Bay movies. Thus ends the dark goth rock Roterfeld.

With "Sea Of Stones" the album takes on more of "Playing The Angel" vibe but gets instrumentally bombastic and ambitiously cinematic (think John Williams or Danny Elfman), but mainly vocal-driven, almost as if an excuse to showcase Aaron’s undeniable vocal prowess and ability to write a sprawling national epic seemingly based, in part, on the classic "The Sound Of Music". The 2018 revisitation of "Great New Life" reminds me why I am a sucker for those big Bon Jovi choruses here with an almost progressive edge, and the accordion-driven "You Are The One I’d Spend All My Money On" draws comparisons to Manic Street Preachers as much as to U2 "Zooropa" for the tuba use especially at the conclusion of the album, not unlike that album’s Johnny Cash-sung "Wanderer".

"Hamlet At Sunset" is an excellent release full of some really strong, catchy tracks such as "No Friend Of Mine" (earworm alert), "Bring Your Own Star To Life" and "I Want More" and "Great New Life (Reborn)" and even simpler tracks such as "Black Blood" have their moments, such the spectacular solos. Indeed, instrumentally and vocally, the album is a mature effort, perhaps (since I never heard the debut) more mature than "Blood Diamond Romance". Aaron Roterfeld, it must be repeated, is a fantastic versatile vocalist with an impressive range and he it is, who’s the prevalent hero of this effort.

It is good for an old metalhead such as myself to occasionally tread different, less extreme waters and "Hamlet At Sunset" beautifully serves that purpose recommended by your friendly neighborhood Eddie Rattlehead.