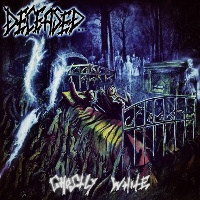 In 1997, when metal was eating its own flesh whilst simultaneously getting devoured by its "nu" impostor, the Virginian death/thrash heavy metal outfit formed in 1985 (after short tenures of Mad Butcher in 1984 and Evil Axe 1985), Deceased, the first band to sign with Relapse Records (which they left in 2003), detonated the unexploded ordinance in the middle of confusion in the form of "Fearless Undead Machines", one of my all time favorite albums. An expansion of "The Blueprints For Madness", "Fearless…" was an explosion of meticulous and masterful songwriting, brilliant instrumentation and even slightly ancient production that fit the mode and the concept. "Supernatural Addiction" (2000) deepened the melodicism while "As The Weird Travel On" (2005) and "Surreal Overdose" (2011) brutalized and sped up the sound adding just as much Napalm Death as melodic death metal whereas both records were kept at an almost constant old school death metal tempo, with Kingsley "King" Fowley’s vocals almost a carbon copy of Mark "Barney" Greenway (Napalm Death), songs becoming less intricate and more straightforward. Now, 7 years later, does "Ghostly White", the last album to feature the tragically fallen drummer Dave "Scarface" Castillo, live up to their landmark standard established on "Fearless…" or have Deceased moved further away from it and in the direction delineated by "Surreal Overdose"?

Well, the answer is yes and yes. Somehow the band was able to continue the progression of the last three albums while firmly sticking to the brilliance of "Fearless…". Back are King’s incredible vocals and serpentine, insanely catchy riffs and leads, melodies galore, exploding now with the kind of raw hardcore energy and power found on Hatebreed’s debut album "Satisfaction Is The Death Of Desire" and Slayer’s "Hell Awaits" with modern production. Or imagine, if you will, Slayer, Iron Maiden and Megadeth, jamming simultaneously at the same rehearsal spawning additional Kreator/Mercyful Fate/Judas Priest hybrids in the process . And the songwriting? It’s so meticulously fantastic it boggles the mind!

Right away, "Mrs. Allardyce", spored from an obligatory eerie horror movie sample, sets a very high standard, with Slayer and Iron Maiden trading places in rifftastic death/thrashfest that is only emphasized by the progressive masterpiece "Germ Of Distorted Lore" where Howard Phillips Lovecraft reigns supreme, Deceased combining the melodicism of "Supernatural", the weirdness of "The Weird" and the masterful songcraft of "Fearless" (particularly echoing "The Night Of The Diseased"), over 13 minutes and not one unnecessary second, but already "A Palpitation’s Warning" is a lot like Thomas Hobb’s life without government in "Leviathan", "nasty, brutish, and short", a kind of Motorhead-ian Slayer, a perfect amalgamate of thrash and death, probably most brutal Deceased track yet still not devoid of melody, and it signals a regressive shift toward "Blueprints For Madness" and even the debut, "Luck Of The Corpse", to say nothing of directly tapping to "Surreal" energy, something fully realized on "To Serve The Insane", a truly HELLISH devastating Mercyful Fate-ian/King Diamond-y ride in Opeth-ian/Kreator-ic vein (what with Fawley’s "the Devil is real" a clear nod to "Gods Of Violence") , the riffs so raw, rugged and uncompromising with almost black metal ending. We are roughly through the length of Slayer’s "Reign In Blood" and more satisfied yet merely halfway down the road.

"Endless Well" is another masterpiece, old school Megadeth-ian death metal, with an excellent melodic Arch Enemy-ic transition at 2:10 mark, but what makes it doubly devastating are the fantastic, thoughtful lyrics on how we seem to be burying more and more of our loved ones at an ever increasing rate, with the Angel Of Death seemingly unrestrained in his wrath as "we come to church to separate from the world, to lock the door flying high from sorrows of today" while "burying our loved ones is killing us, dying before their time", and how poignant it is when you consider the untimely departure of King’s not mere band mate but a true and trusted friend. Taking pages from Peace Sells But Who’s Buying/So Far So Good So What Megadeth era abundantly watered with classic Iron Maiden , "The Shivers" is one of the best tracks on the album, and this is perhaps while "Thoughts Of The Leaking Brain", despite still being an excellent modern Kreator-ic thrashfest from front to back down to King emulating Mille Petrozza in a vocally processed chorus and an excellent melody at 4:04, nevertheless, feels slightly underwhelming in comparison (and thus less than perfect score). Fear not, though, for the closing "Pale Surroundings", epicly intro’d with a creepy female voiceovers followed by Suicidal Tendencies melodicism intermittently phased by My Dying Bride-ian transition and female spoken word (like Countess Bathory on Cradle Of Filth’s album), more excellent Kreator-ic/Slayer-ic riffs, echoeing melody and vocal pattern from "Fearless", getting faster faster perfectly climaxes in a classic Metallica riff. What a ride!

On this, their near-perfect 7th disc, much like Revocation recently, Deceased is Phoenix reborn, fiery, dangerous and genuinely evilly metallic with ferocious ideas and execution you will savor for spins on end, addressing, referencing and sampling every single album in their discography while staying both relevant and brutal, sporting one of the best, most well balanced production jobs in recent metal memory, and above all, creating some of the most original while classic sounding riffs and melodies in the history of controlled heavy metal madness. Is this their best album? Is the sky blue on a clear sunny day? You heard this here first: I dare Megadeth to produce a better record in 2019.