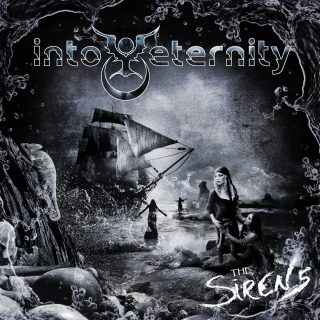 INTO ETERNITY – The Sirens

Formed in 1999, Canadian progressive melodic death metallers Into Eternity lit me up with "Buried In Oblivion" and "Scattering Of The Ashes", which prompted me to reach also for the excellent "Dead Or Dreaming". Especially "Scattering" did some considerable spinning time in my car. That is why "The Incurable Tragedy" was such a disappointment. Tracks seemed haphazard, melodies lazy, captivationg hooks known from previous albums were few and far between, the sound/production was terrible with the volume so low it felt like a 80s Testament record. When the band disappeared from view for ten years I thought, better now then if they released another letdown. Stuart Block quit Into Eternity in 2012 sometime after recording "Fukushima" single and joined Iced Earth with whom he stayed to date. Although Tim Roth always did plenty of vocalizations for two, a very versatile performer responsible for growls and cleans alike, Block still had to be replaced by Amanda Kiernan from The Order Of Chaos, whose vocalist she still is. Two old singles (2011, 2012) that ended up on the new album, "Sandstorm" and "Fukushima" plus especially the most recent one, "Fringe Of Psychosis", managed to rekindle my interest although I immediately noted that Into Eternity sadly repeated the "Tragedy" production mistakes. But there were still five more tracks to consider before rendering judgment.

The album starts out with a delicate to ambitiously symphonic intro which turns into an aggressive riff reminiscent of "Sell God" from "Dead Or Dreaming" album followed by very virtuosic progressive guitarwork in the Death "Symbolic" vein. "Fringes Of Psychosis" recalls God Forbid’s "Constitution In Treason" with progressive guitarwork reminiscent of Machine Head’s "The Blackening" album, while "Sandstorm" heavily borrows from Iron Maiden’s "Fear Of The Dark" with Slayer-ic riffs, both tracks kept in the convention of "Scattering Of Ashes" album and tracks such as "Emotional Distress" or "Timeless Winter", whereas all three songs are bereft of any surprises, just solid progressive death metal, even if often compositions still feel haphazardly progressive. It is "This Frozen Hell" that brings the album’s most satisfying, most balanced track. Lyrically, possibly about a bad relationship you can’t get out of, war or horrible socioeconomic situation while musically leaning toward classic Arch Enemy/promordial Dark Tranquillity or Judas Priest, it has also a strong Biomechanical vibe with a spectacular guitarwork to boot. "Devoured By Sarcopenia" could have been the demo version of "Spiraling Into Depression", my favorite track from "Buried Into Oblivion", whereas the already known "Fukushima" with fantastic melodies and riffs easily rivals the highlights of "Scattering Of Ashes", and that not at all coincidentally, overall, showing the band in top form in every instrumental and vocal aspect.

The most disappointing aspect of this excellent album, though, is its occassional songwriting inconsistency. While "This Frozen Hell" is easily the disc’s strongest statement, its follower is "Nowhere Near", an Iced Earth-like acoustic/ballad that really showcases Amanda’s vocal ability as it goes slightly Opeth-ian and long-winded, with good melody but much late, chaotically progressive but disjointed, with great guitarwork, but songwise probably the worst offering in the bunch, its title seemingly sarcastic about that, whereas the near instrumental "Scatrering Of Ashes 2", although itself closer to "The Incurable Tragedy", evokes a feeling of unnecessarily extended play. Finally, the production, while noticeably improved over the terrible "The Incurable Tragedy" is still a bit too far from "Scattering Of Ashes", to say nothing of the perfection of "Buried In Oblivion"

Glad I am that they did not call it quits and delivered material worthy of their name after a 10 year hiatus, I rate this effort as still far from their best. Hopefully their next album will truly scatter some serious ashes.