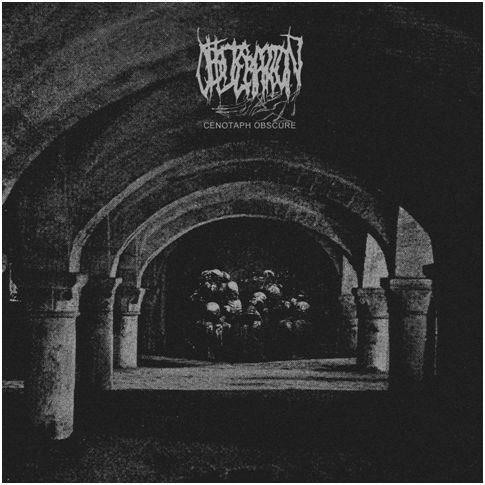 from the album
"Cenotaph obscure"
Out November 23rd via
INDIE RECORDINGS

Obliteration are premiering the album title track "Cenotaph Obscure" today! This is the second single off their upcoming album Cenotaph Obscure which comes out on November 23rd. The track is saturated with roaring guitars, raging drums that herald the impending doom eventually brought into the song by dark and menacing vocals. Dive into this death metal treasure and let it consume you!

Following their now classic Nekropsalms (2009) and the harrowing Black Death Horizon (2013), the latest offering further expands on the quartet’s trademark sound; lead heavy old-school death metal with distinct flavours of both doom and black metal. Inventive yet never difficult to grasp, technical without wankery and obscure without being diffuse, OBLITERATION are masters at their craft. Cenotaph Obscure was recorded in Studio Cobra, Stockholm with Martin "Konie" Ehrencrona at the helm, lending the album an organic yet in your face production. In perfect keeping with the music, the lyrics deal with dystopic, apocalyptic themes, extinct civilizations and interdimensional portals etc. With Cenotaph Obscure, OBLITERATION cement their status as leaders in the Norwegian death metal scene,
delivering a grizzly yet flawless monument to Death metal the way it was meant to be; obscure, ominous and unpredictable." – Einar Sjursø ( Virus, Infernö. Duplicate Records).