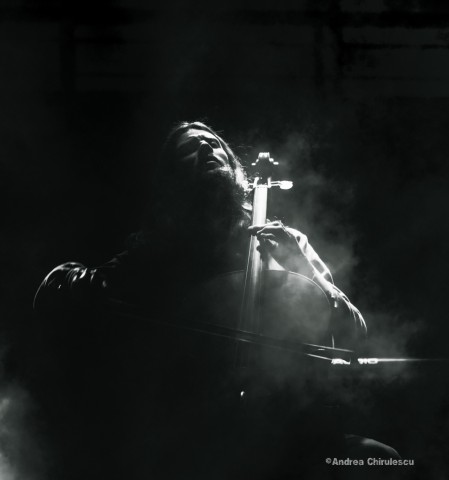 Raphael Weinroth-Browne performing at MOTSTRØMS, Norodden 2018
Photo by Andrea Chirulescu
I was fortunate enough to be able to attend Motstrøms, which translated from Norwegian means “against the current”. Motstrøms was a celebration of a long and many-faceted musical career. It was about Emperor, Ihsahn’s solo project, the projects he has developed together with his wife Heidi Tveitan, as well as the musical contributions of significance from other important musicians such as Leprous and Raphael Weinroth-Browne, among others.

Motstrøms is a fitting name indeed, taking into account Ihsahn’s musical character. I was excited when I first heard about it, and felt right from the beginning that it was going to be a special evening. I started getting “the I can’t believe I’m here” feeling just before arriving, the kind of feeling I do not get in Oslo anymore. Besides, Emperor were going to play some songs, and I had to be there. I have been following pretty much every Emperor concert I could attend, and I’m grateful for any new concerts because I know it will stop abruptly some day, and that will be it.

The event took place in a cool place — a dam. A huge stone construction that still had in place an elevated canal system with old barrels on it. The setting, which seemed old and industrial, made us feel like we were back in the 1800s. High stone walls, grey and cold. created an imposing and fitting atmosphere. The venue itself was enclosed within those high walls of a construction that could be compared to a fortress. It was the same place where the video for “The Loss and Curse of Reverence” was filmed. It felt pretty special, all in all.

The evening started with an instrumental cello composition originally written by Starofash, which is Heidi Tveitan‘s project. It was dramatic and elegant, and then of course Emperor performed I Am the Black Wizards, “The Loss and Curse of Reverence“, and an always impressive “Inno a Satana“. Starry skies above, cold stone walls around, and the dark Norwegian forests all surrounding us. It was as perfect as it gets.

EMPEROR performing at MOTSTRØMS, Norodden 2018
Photo by Andrea Chirulescu
After the Black Metal part of the evening I got to experience another project called Hardingrock in which the Tveitan family arranged the music, and that counts with the contribution of a Norwegian folk musician named Knut Buen. He plays an instrument that in Norwegian is called hardingfela, which is pretty much a Norwegian fiddle. (That fiddle has been previously mentioned in an interview I’ve conducted with another Norwegian band called Dreamarcher, in case you wanna check more Norwegian fiddle-related stuff.) The thing with Hardingrock is that, well, it’s in the name. The sound is a combination of the Harding fiddle and, yes, electric guitars. It’s folk traditional instruments and songs and themes, made modern.

I’ve found like 102 different versions of the folktale “Margit Hjukse“, but Hardingrock’s version of it is darker and has a proper ending to my liking. It is a folk song about a girl who has been kidnapped by a king who lives inside the mountain. The whole of “Margit Hjukse” is a long narrative. This sort of folktale deals with kidnapping by mountain creatures, a motif that repeats itself in several stories. It also pops up here and there in Black Metal. It’s about being bergtatt (taken by the mountain). So, if you did not know, this is what that word, connected to Ulver, really means.

The only thing that is off with this folktale is probably that the sound of church bells tolling frees the kidnapped person by means of some unseeing craft. I think it ruins the tale, because it’s such an easy solution. Ring a church bell, mountain opens. That easy!

Why would the mountain king heed the sound and free the girl anyway? I like to think these beings are more powerful and resourceful than that, since they are supposed to be another race that’s able not only to live inside the mountain but also to open it at will. And there are some other obvious reasons why this imagining is such… a fairy tale.

IHSAHN performing at MOTSTRØMS, Norodden 2018
Photo by Andrea Chirulescu
So yeah, I’m always a bit bummed with the bells being mentioned when I read other versions of the bergtattstories. In the Hardingrock version, though, the mountain creatures are lucky enough that the church bells fall off their hinges (or something), and the mountain closes itself again, leaving the girl inside to marry the king. So that’s a good ending because it leaves you thinking what might have happened, before or after, probably lots of things, not unlike other versions of that same folktale where you end up imagining the person safely arriving back home to eat their porridge at night, and I suppose that’s nothing but boring.

After a couple of funky songs from Leprous, Ihsahn arrived, transfiguring into a live band, because that’s what they do at times actually. The whole show started with “Til Tor Ulven”, from Arktis, which gives you that eerie old feeling that one gets from Hardingrock, and after that one there arrived the coolest part of the whole show, the Àmr songs.

I really liked Ihsahn’s last album. First of all, I find the album much darker than Arktis, and to be clear, I’m a huge fan of the ’80s and of synths. So I have a predisposition to like it. So it was a wow moment. Everything around the sound fit the Àmr feeling, as well as the deep, dark red lights on stage, which were in style with the elegant, eclectic Àmr artwork. So yes, I enjoyed it a lot.

Besides, the venue is lyrically pretty, tied to “Lend Me the Eyes of Millenia” since it is kind of frozen in time, with all the old barrels and different objects that take you back in time while still being in the present. The venue was representative of the concept that Ihsahn wanted to convey with that cool song.

Right after the previously mentioned song, they played “Arcana Imperii“, which has epic parts amidst the funky, jazzy parts. Later it was our turn to listen to something from the first album, “Called by the Fire”. And the whole evening ended with an interesting composition called “The Last Milestone“, which wrapped up the whole musical experience with cello and clean vocals.

INTO ETERNITY – The Sirens