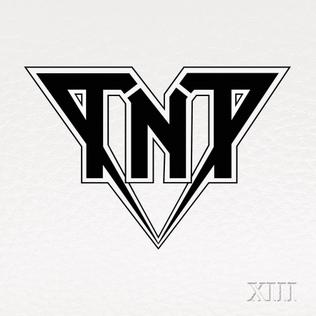 The renowned and long-running Norwegian entity named TNT recently released its thirteenth album via Frontiers Records and I must admit that I was quite excited about receiving a promo copy of the album as I was keen on listening to what the band’s new vocalist had to offer. After the split with former singer Tony Harnell (who has numerous writing credits on this record), TNT recruited Baol Bardot Bulsara and judging from the quality of his voice on this output, that was a smart move.

"XIII" very much sounds like a TNT record, or rather; it sounds just like a TNT record ought to sound like in 2018. There are some deftly composed solos, hefty riffing, and soaring vocals to be found on this disc of theirs, and it is very much rooted in 80s hard rock/melodic rock/AOR/glam rock, but the slightly odd production does not have that 80s sheen to it and instead sounds a little more current and sharp somehow. A song such as "Fair Warning" has a booming and atmospheric edge to it that sets it apart from most other tracks on the album and adds diversity to the proceedings. The Queen-esque "It’s Electric" and "Where You Belong" possess a funky and groovy vibe that provides a cool contrast to the darkened mood of "Fair Warning" and those two tunes are undoubtedly a couple of moving compositions. "People, Come Together" sees the band rocking out and giving it their all and "Can’t Breathe Anymore" also stands out as one of the more entertaining pieces here.

The frustrating thing about "XIII" is that parts of the song material do not come across as particularly inspired or inspiring. "Get Ready for Some Hard Rock" is treading water and heading nowhere, which goes for "17th of May" and "Tears in My Eyes" too. As with literally any TNT album there is a strong focus on good and catchy melodies and there are some great arrangements scattered throughout the record, but while parts of the album are thrilling and exciting, others are simply mundane and generic. I applaud the fact that the band have introduced some different and to some extent experimental ideas this time around, but I wish they had opted for a more massive, powerful, and dynamic production. The musicianship is superb, there are some hook-laden songs here that any lover of melodic rock ought to dig, and Ronni Le Tekro still knows how to write fist-pumping riffs, but "XIII" is a little too uneven to ever become mind-blowingly awesome. Still, the positives outweigh the negatives and Mr. Bulsara does a commendable job and sings with passion and potency, so there is no reason why you should not give this one a spin or two.

CRIMSON DAY – At the Mountains of Madness