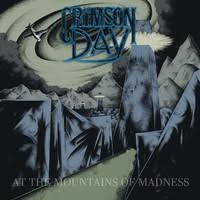 CRIMSON DAY – At the Mountains of Madness

Crimson Day, named so after D-Day of Normandy, is a Finnish thrashing heavy metal band heavily rooted in Iron Maiden and Judas Priest but taking pages from Dream Theater, Megadeth, Trivium and even Dark Tranquillity. "At The Mountains Of Madness" is their second album and boasts excellent production courtesy of Jussi Kulomaa. The album’s lyrical concept is based on Lovecraftian tale of the same title.

Right after the short intro Crimson Day bursts with incredible musicianship and excellent songwriting on the opening title track as vocalist Lassi Landström showcases multiple range and ability to channel different vocal stylings, such as Ozzy Osborne, Klaus Meine, Rob Halford and Dave Mustaine, and here particularly James La Brie (Dream Theater) wrapped in deliciously melodic guitar work of Ari Balzar and Jessie Liukkonen which borders on virtuosic at times, with Tuomas Lessonen varied consistent drum work. But the song is a mere taste of what Crimson Day prepared for those who love them, because "The Final Hour" has got to have one of the most infectious victory choruses I have ever heard. I seriously cannot get enough of this song, what with this incredible message of "humanity now and always its own worst enemy", which poses the question why atheism and secular humanism consistently fails but no answer can be given without looking outside of humanity, and that point is only emphasized in the equally fantastic Queensrychian "No Hope (For Salvation)" whereas mankind shall "burn to the ground and feel the flames laughing out loud" leading into RIP-tastic "My Last Rites" that does not even conceal its Megadethian obsession when it’s not Maidening, one of the best tracks on the album. The second part of the album is still exciting but owes more to Trivium "Shogun" solo-like choruses, until it meets another obvious reference in the "Nightwalker" Lassi channeling scary good Halford (Judas Priest) and equally impressive Klaus Meine (Skorpions) on the ballad "Before The Night" or eerily Mustainey "Beast Of Prey". Crimson Day saves the best for last with the closing nine minute war epic "Crimson Shores" that owes as much to Dark Tranquillity’s "Haven" as to Iron Maiden.

Despite the high quality of this affair and generally great variety in pace and mood, some of the songs seem to be merely keeping up the standard instead of offering new things such as was the case with Trivium’s "Shogun" album, some of ideas recycled into similar sounding and structured songs. On both albums these songs are still of high quality but stacked up against their more original and daring brothers and sisters they’re found wanting. There is, therefore, a compelling reason to lower the score but not too much.

Crimson Day is an excellent release from a ridiculously talented and skilled band who, if this album is any indication, has what it takes to catchup with the classic heavy metal acts provided they take even more chances with the songwriting on future endeavors. Highly recommended.

LORDS OF BLACK – Icons of the New Days