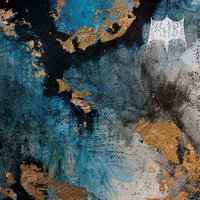 The most interesting part about this melodic black metal project is that Kosmogyr consists of just two guys, Chinaman Xander Cheng (bass, guitar) and Czech Ivan (vocals, drum programming) who had collaborated over the internet. Does it work?

Kosmogyr surprisingly works very well. Ivan’s production is great, the atmosphere of the album is superb, the gorgeous melodies and the brutal riffs are very engaging particularly on the Heaven Shall Burn-esque/Agalloch-ian title track or the closer "Thallassic Lunacy", while they deserve special accolades for the Death "Voice Of The Soul" – inspired "Refulgence", with the second half of the album noticeably more dynamic, progressive and creative. The lyrical concept is cryptic but it gives an impression of a holy army of beings fighting a war with demonic legions where Ivan’s narrator appears to be either decidedly on the light side of the Force or simply undecided, which makes for an interesting light and dark play.

The only gripe about this album I would have is that the first three cuts seem like a standard black metal fare and the listener may have a hard time engaging until the aforementioned title track, but once it reaches it the record is superb and worthy of multiple revolutions to absorb all its magic and beauty.

Kosmogyr pleasantly surprised me with "Eviternity", especially given the scarce lineup and I will be awaiting further developments from these guys with great interest.

GRAHAM BONNET BAND – Meanwhile, Back in the Garage