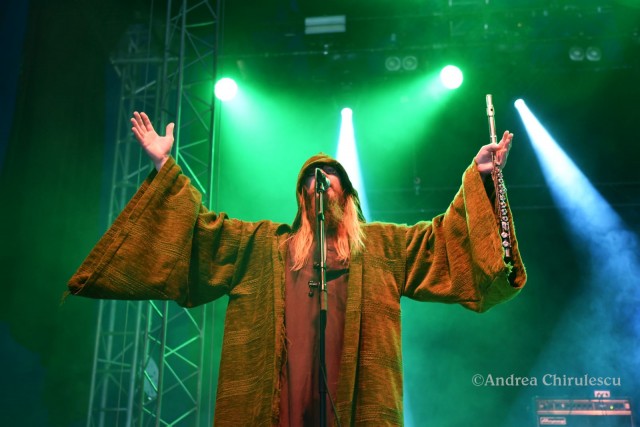 Editor Note – our photographer has attended the wonderful Tusmørke concert and right after that got a chance to sit down for an interview with the band, thus missing some of the bands reviewed by our colleague Nichlas at the beginning of the 3rd day.

The last day of the festival was a somewhat punk heavy day, but it did have some gems from other genres as well. Skambankt gave the audience a somewhat punky concert, but it really felt a bit to calm to be categorized as punk, even though they have some rather clear punk elements in their music. This was a nice point for the audience to just chill and hang out and listen to some personable punk that isn’t too offensive or too hard on the ears. It was a tight show, and most people appreciated the musicians welcome to the last day.

Another one in the punk/hardcore category, Tons dished out maybe one of the most good-feel bands in Norway, namely Lüt, from the city of Tromsø. This band really did the best they could and tried as hard as possible to use the entire stage – and the crowd’s area to move in. It’s not that often that we see a mosh pit where the band’s singer is in the middle of the pit – while still singing. This band was just youthful energy incarnate. We can all hope that these boys will keep it up for the next 20 years, and that they will have the same way of seizing their happy energy throughout their careers. It could remind a lot about Kvelertak – which we will get back to.

Skeletonwitch was the day’s most prominent representative of heavier and more extreme music. There are few words to describe how tight this band was. They delivered everything expected of them and much more! Melodic and yet heavy music with a band that seemed to be performing in a stoic, yet relatable way. This was definitely one of the top bands of the festival, and they presented themselves in the best way they could possibly have done.

Opeth from Sweden is one of the more known prog outlets with roots in more extreme variants of metal like black and death metal. Åkerfeldt seems to be focusing more on the beauty in music, rather than the ugliness, and it shows a lot in the way he and the band performs their material. Åkerfeldt himself had a very personable way of talking to the audience, and it almost felt like he was just hanging with the crowd, rather than performing for them. The sound could have been a little bit better (especially since it was the main stage), but it wasn’t a problem that was impossible to overcome.

Bringing us back to the Satanic Panic, Coven, gave a spectacular show that really showed how old school satanism could in some ways feel even more heavy than the heaviest black metal bands. There is something about the poppy sound combined with the witchy, satanic lyrics that just points out the scary atmosphere in a way that a more obvious band can’t capture. Jinx is truly one of the most inspiring front figures of all time, and the fact that she has been going on as long as Black Sabbath with her musical coven just points that out in a great way. Coven is today one of the greatest icons of black metal, and they don’t even play that genre. The crowd was lucky to experience such a solid performance! Tons of Rock better invite them back someday! (Hint to Beyond the Gates: Book this band!)

One of the biggest peroformances of the festival goes to Helloween, that performed a fraction of their Pumpkins United show. The only issue with shows like this is that it gets somewhat obvious that it is a shortened version of a rather grand show. As enjoyable as it was, it felt like a shame that they didn’t have the time to perform the show in it’s entirety. While hits like Dr. Stein and I Want Out was in the show, there were some great songs missing from the setlist, and that is the main problem with such an elaborate show being cut down by two thirds. With that said though, it was probably the show on the main stage that felt the most like a grand show. If anyone gets the chance to see the show in its entirety, then do so!

And to top it all off, Kvelertak gave 100% in order to show every other band that 99% just isn’t sufficient. The crowd was served one of the tightest shows imaginable, and they loved it. It is as if Kvelertak is unable to perform a solid show, as they never give anything but that. This was a great way to end a great week of concerts, and a great way to say goodbye to Tons of Rock until next year. A bit too many songs from the latest album compared to the last two records, but not really a problem in the grand scale of things.

In the end, Tons of Rock was a great experience once again. The same problems with the sound in the tent as last year, and the fact that the Huth stage wasn’t a thing this year pulled the experience down a little bit, but not enough to make a huge impact. Tons of Rock is still a very much recommended festival for every metalhead and rock fan to attend.