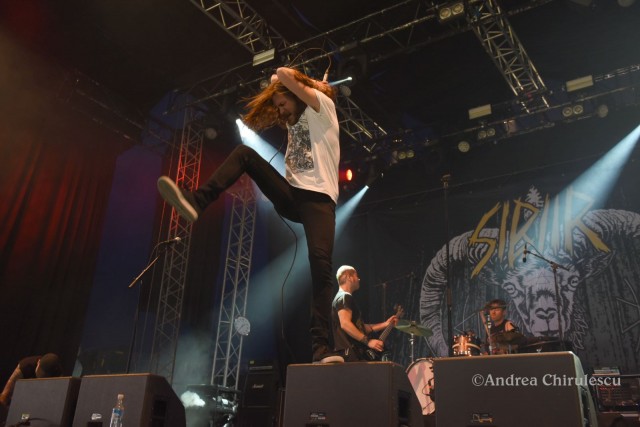 The first band of day 2 was the Norwegian up-and-comers, Sibiir, which plays an interesting mix of hardcore and extreme metal. Their sound on stage wasn’t too bad (even if it was in the tent) and they had a decent crowd watching them (even if it was rather early). The band managed to make a lot of energy with the audience, and they put on a tight and fun show. The best part was to see how fun it seemed for the artists, as that is a rather important part of a show that some people forget about. Great show, great band. Let’s just hope that these boys stick with the music, so that they can actually get to become a bit of a sensation.

Later during the day, the rain started to pour down on all the festival goers. The sky turned grey and a cold breeze flew in over the festival area. Perfect weather conditions for the ghosts of the Netherlands, Carach Angren. They entered the stage and provided a very theatrical ghost story for the crowd, both through their music itself, but also thanks to the pronounced way that the vocalist, Seregor, moves on stage. Now if these guys had been allowed to play the main stage, it would have been amazing. Sadly, they were in the tent, and you couldn’t hear much more than the beating of the bass drums, which is a damn shame, because Carach Angren’s music has so many awesome elements to it. The show was still cool to look at, and the band seemed to be very much in touch with eachother as well as the crowd, so all in all, the experience was ok.

While Carach Angren performed their ghost show in the tent, Epica entered the main stage, and it was a somewhat interesting thing to see. Not a lot of people chose to defy the bad weather in order to see Epica. While it wasn’t empty, there were most certainly more people watching the other show. Epica themselves didn’t let it slow them down though, and they performed a very energized show for their audience, where they had a closer contact with the crowd than any other band had managed to create at the main stage so far. Epica’s music is very melodic and they have a lot of vocal lines over it, and let’s just say it would be naive to think that none of the vocals on the show were playback. That didn’t really ruin the show in any way, but it is something that people that want to see them live should maybe keep in mind. In the end, Epica performed a good show for the people that showed up, and the band seemed to have a good time as well.

The next act to hit the tent was the somewhat goofy, but still lovable Gothminister. These guys came to deliver a somewhat relatable horror rock show, which in and of itself is a little silly, but the music itself is enjoyable, and at least the band does something on stage. Now some of the props looked a little homemade or plastic, and it didn’t seem like the stage show was something the band had used any significant time on developing. This was a problem for one big reason: they played in the tent right after Carach Angren, and so the contrasts between Carach Angren’s grand show, and Gothminister’s somewhat amateuristic show became so much more obvious than it could have been. Just to point it out once more: The music is definitely not bad, and if someone is into a bit of industrial rock, then this band is a great listen. Live it just seemed a little bit clumsy.

Witchcraft was a musically lovely band that sadly didn’t offer much in terms of a live show. They didn’t perform badly or anything like that – they were just nothing special to look at. And with the sort of imagery that the band uses for their merch and albums, and with the way their music sounds, it could honestly have been a bit more interesting if their live show didn’t look like a rehearsal – but on a stage. Good artists, but the live show was rather underwhelming.

Next up on the main stage was Alice in Chains. Probably the least interesting band on the roster this year, and they performed the least interesting show as well. Somewhat tight, nothing to look at, the contact with the crowd didn’t work, the music itself wasn’t very interesting and the whole thing just felt rather flawed and misplaced. This is something Tons of Rock has a tendency to do, too. Last year they booked a great festival, and then they announced Blink 182 (that ended up cancelling). It was a weird decision to book them and it felt like it didn’t fit in with the rest of the festival. The exact same thing can be said for Alice in Chains. It didn’t feel like the band was at the right festival, and it just ended up feeling like the entire festival had grounded in to a trench for the entirety of the concert.

To bring us all back to the feeling of the festival, Sweden sent their heaviest ambasadors to the tent stage, namely Marduk. No better band to be a complete opposite from the wishy washy concert at the main stage than basically the national black metal kings of Sweden. These guys entered the stage, guns blazing, and they gave the crowd one of the tightest black metal shows of the festival. They, like Carach Angren, seemed like they had a very grand show, but in a completely different way. The sound quality of the tent didn’t completely kill off the show of Marduk either, so that is a big plus. This show was definitely one of the highlights of the day.

And then it was time for the old boys of W.A.S.P. to perform another heartfelt ending, like Ozzy had the day before. Now granted, as far as we know, W.A.S.P. is not planning on ending their careers just yet. They did however give Tons of Rock a very nice show that isn’t going to be forgotten for a while. They were tight and had a nice way of communicating with the crowd. They played he hit songs as well as some more «fan club only» numbers, and that felt like a good desicion on W.A.S.P.s end. Not much else to be said about it.

Ok, so let’s talk about Gåte. This band is known for delivering some quality live performances, and their heavy folk music is somewhat interesting. Now with that said, their music needs some getting used to, and it is not music for everyone. And that will be the only thing in this review that is not 100% in awe of this band. Gåte’s energy on stage was completely unmatched by anyone. Their performance was so far beyond any other bands that had played so far, and they didn’t even get close to be challenged on that front later either. This was definitely the best experience of the entire festival. Everything was on point. Everything hit the mark and the band was just on another level. Go see this band if you ever get the chance! You will not regret it for a second!