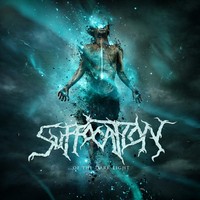 Since the 2006 eponymous devastating come back album, Suffocation has been on a roll. Both “Blood Oath” and “Pinnacle of Bedlam” have been exercises in ordered brutality which showed signs of progression and even successfully flirted with unlikely genres such as hard core and thrash to get the point across. Considering that this is one of the cornerstones of death metal, reaching as far back as 1990, just when Chuck Schuldiner (Death) decided to abandon the wide and oft travelled road on the path to future greatness, with so many new and exciting bands appearing out of seemingly nowhere every day, many of which inspired by Suffocation but improved upon their own craft, do we still need Suffocation?

There are three of most infuriating ingredients about a brutal death metal album: crappy production, crappy production and crappy production. The section Derek Boyer (bass) and Eric Morotti (drums), probably executes the material as splendidly as ever but I wouldn’t know because I must agree with Angry Metal Guy that it sounds like a high speed type writer and the bass sometimes disappears entirely. I was surprised to find out that the famous/infamous Frank Mullen only recorded vocals in the studio but is no longer interested in being a part of Suffocation, until I heard this album. Even the oh so unSuffocatory artwork is telling of a slow rot, to borrow from Obituary, the decline toward oblivion. Above all, one thing screams louder than any instrument or voice on this album: Suffocation is desperate for new ideas.

Not counting the last track, which is an excellent rendition of an old “Breeding The Spawn” classic, “Epitaph Of The Credulous”, I counted a grand total of three interesting tracks. “The Warmth Within The Dark” is fairly technical with middle pace, one of those exceptions where Morotti’s "feet" actually sound compelling, and the riff straight from Kreator "Terrible Certainty" definitely helps make it so, with Mullen brutal but tired, with Nile stop and go, near-Panteric vibe, brutality and chaos, and Nile ending, but then again, who was first goes without saying, as it often happens that bands who inspire other bands end up inspired by those they inspired in the first place (you follow?) Similarly to “Provoking the Disturbed” (Blood Oath), “Return To The Abyss” reaches out to hard core fans and ends up being the best track on the album, fast, brutal and scary as the dude from “The Saw” horrors, ending on a beautiful acoustic note. “Caught Between Two Worlds” features some great stop and go riffs akin to Human-era Death with jazzy breaks, recalling, too, early Hate Eternal as well the more thrashy Nevermore “Godless Endeavor”, Mullen using an unusual vocal phraseology, with (finally!) great melody.

Of the rest one need not write in great length, as it is plagued by the aforementioned inability to sustain the listener’s attention for the duration of the song. The problem is, when Suffocation gets melodic they quickly end the song, as if they suddenly were afraid to be catchy (Some Things Should Be Left Alone), with “The Violation” taking the cake for a bona fide filler, but when they get brutal they stay so brutal so as to emphasize how brutal they can get before you mercifully press “skip” (the title track), and just when you’re getting ready to execute, they slow down to a slightly moving almost-funeral doom ended with a series of deafening staccatos. Mediocrity and chronic, palpable uninspired air abounds throughout.

Once pioneers of creative and brutal death metal, Suffocation aged with time and shows signs of desperate need for either retirement or down right resurrection. Never before have they released material where they sounded like they were chasing both their own past and the current trends in the genre and beyond. Gone is that one elusive, intangible thing that made them special. Though aiming for progression and variety littered with good ideas and catchy parts, Suffocation loses the ability to sustain the listener’s attention in a genre that absolutely cannot be stale or boring or the entire point is lost.