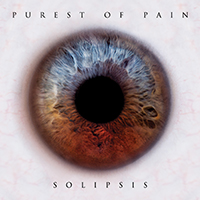 Having established its sound somewhere between the likes of In Mourning, Dark Tranquility, The Absence, and their own country men Detonation, Purest of Pain (featuring guitarist Merel Bechtold of Delain), aims to redefine and restructure melodeath from within rather than without, using strictly guitars to create the most unusual and atypical sounds and effects normally achieved with extra instruments, courtesy of Michael van Eck, taking a page from Septic Flesh (Revolution DNA), with a few noticeable missteps.

While many of the tracks show great attention to detail and substantial craft, Purest of Pain appears to stretch the music to accommodate lyrical concept (an indictment against the hypocritical and so often worthless human kind) akin to Pink Floyd’s "The Wall", delivered in J.D. Kaye’s Jamie Stewart-like raspy growls (The Absence), Bechtold’s backing vocals, but end up creating a few non-songs without which point still would have been made across, if “The Pragmatic”, “The End” and even “Truth Seeker” are the indicators, clear cases of overwhelming the content with form.

On the other hand, Purest of Pain can write some incredibly good songs. Take “Vessel” – immediately melodic, recalling In Mourning in melody or progression, short, but definitely sweet, the very melodic and catchy “Tidebreaker”, with fast riffing of Dark Tranquillity’s “Character”, the harmony of Hypocrisy’s “The Arrival” and reference to Death’s “Cosmic Sea” (Human), with Arch Enemy chorus, melodic death metal per excellence! For good or bad Purest of Pain uses some djenty riffing and metalcore leanings on the incredibly sad and depressingly beautiful “E.M.D.R.”, the track the most akin to Septic Flesh’s “Revolution DNA”, incomplete without the cynical lyrics such as “we make are beds to burn in and so few of us pull through” But the real crown jewel of this album is “Terra Nil”, the culmination of the lyrical concept (suicide seen as tax evasion), more depressing than some death/doom, with a fantastic chorus following the Dark Tranquillic atmospheric little squeals, as well as a surprisingly fitting Marilyn Manson break, the song equivalent of a sucking abyss trying to swallow up the listener. The excellent production emphasizes these little nuances, ebbs and flows, with Joey de Boer’s drums of particular notice on faster parts and Frank van Leeuven’s bass and Bechtold’s near-industrial powerful guitars on the slower ones.

While Purest of Pain create unusual, very memorable and original melodies that warrant repeated application, at times, they appear to struggle to get their point across musically to match the, admittedly, brilliant and witty lyrics. Given that this is their debut, I predict great future ahead of them if they tidy up the songwriting, learning to properly balance the music and words for a compelling end product.