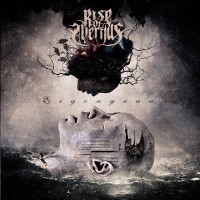 Apparently still working on their own identity, Australian Rise of Avernus draws from variety of influences on their second album; mostly death/doom with black and melodeath. The genre medleys don’t always work and still sound unnatural most of the time, plus the keys/synths can get annoying and overbearing, killing the power of guitars, although not as obviously as Borealis. Logan Mader (ex-Machine Head, ex-Soulfly) produced the album and it does sound huge, comparably to the likes of Septicflesh, with whom the Australians have the most in common.

At first, I think I am listening to a Nile album, with a slow apocalyptic doom introduction of “Terminus”, but then the faster, more symphonic sections remind me of Septicflesh (apparently, I’m not the only reviewer to make that association) Ben Vanwollenhoven (also all keyboards/synths) growls both in a black metal and deep low doomy fashion, similar to Aaron Stainthorpe from My Dying Bride, which also goes for the music, complete with melodeclamation, death metal influence and melody, but in this last respect they are more akin to In Mourning from their excellent debut album. Having finished the opener with an atmospheric end, Rise of Avernus reaches back to the Nile/Septicflesh bag of tricks for “Ad Infinitum”, where I hear some classic symphonic black, Sadist but also that groovy riff smacks of Machine Head’s “In Comes The Flood”(Bloodstone & Diamonds), although it also features a Gregor Mackintosh-like solo (Paradise Lost) and a piano ending. Not surprisingly, then, “Gehenna” is full-on Paradise Lost with Mares Rafalaeda clean vocals (if I’m not mistaken) strongly reminiscent of Nick Holmes from “Draconian Times” era.

It is here where the songwriting quality decreases and gives way to weird experimentation, whereby blackened death metal is mixed with apocalyptic keyboards while still maintaining that Septicfleshly background, somewhat all progressive for progression sake. Predictably, “Eigenlicht” (another way of saying: Eigengrau – the grey that human eye sees in the dark) recalls “Enchantment” (Draconian Times opener) as background for post-Fish Marillion which helps usher in some solid In Mourning melodeath or even Grey Skies Fallen (where are you guys, btw.?) Here, again, the tendency to go progressive, eclectic, and convoluted results in boooring and momentum killing, though not for the lack of trying to do something that Mikael Akerfeldt (Opeth) wouldn’t try – overall, an ambitious but messy endeavor. These, to paraphrase Thomas Paine, are the times that try my soul, as Rise of Avernus genre hops like an ADHD kid with equal guitar, keyboard and piano talent, but lacking appropriate boundaries. Seriously, just when I start to enjoy a particular part they change on a dime and never repeat it again. Fortunately, the Australians regain composure somewhat on the lengthy but a lot more successful closer “Into Aetherium”; a slow atmospheric, ultraheavy Daylight Dies (miss those guys dearly) upon melodeath with old school death flavor and black metal pace, whereby there’s a new game called “let’s see if you can guess when we finish”, fooling me about four times with a fake ending, but eventually it all gives way to monstrous metallic riffs and Gregorian chants, and goodbye. Finally.

Rise of Avernus are on their second album, so perhaps this review may appear a little harsh, but I think they are still searching for the right balance, having clearly mastered the instruments, the vocals, the energy and the hunger to accomplish something unique. I think they should develop more of the death/doom base with a special focus on melody as this is where they sound most convincing. They often appear to not be fully conscious of direction or purpose, and they may need someone from outside the band to help reign in that overbearing symphonic tendency and to spare the listener needless change on a dime that kill the momentum and the listening pleasure.