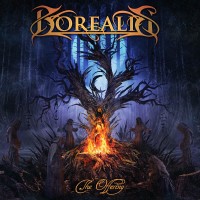 Borealis is a Canadian heavy/power metal band whose sound appears to be the meeting point of Evergrey and Symphony X with some latter In Flames and Killswitch Engage melodic tendencies.The Offering is their fourth full length, and the arrangements, melodies and overall concept are mostly impressive but the occasional reliance on keyboard melodies rather than guitars, especially where the material seems to be begging for the reverse approach, can make the effort sound one-dimensional and flat, if not uninspired. As the result, the album is a mixed bag where brilliance and mediocrity go hand and hand.

Compositionally and melodically “The Offering” is full of light and dark, catchy, oozing multiple creative melodies enveloping every track, magnificent solos, changes on the dime, including stylistic changes all of which hold generally well against repeated listens. Some songs have double choruses (Sign of No Return, the title track, The Second Son) and these are among the best tracks on the album. The problem with Borealis, as had been in the past, is that after so many releases, the band still lacks its own identity, an amalgamate of Evergrey and Symphony X, and it does not help that Matt Marinelli’s almost operatic, admittedly fantastic, vocals are both Russell Allen and Tom Englund. However, neither Evergrey nor Symphony X extend the keyboards the way Borealis often does, to the point that guitars are merely a backdrop, which sometimes sounds weak and additionally drown out the guitars. The worst offenders seem to be “The Fire Between Us” (the opener!), “Into The Light” and “The Awakening”.

Based on the lyrics, Borealis could be alluding to the Biblical obsidian cult of the Pagan god Moloch to whom child sacrifice was made by their own fathers to ensure military victory, witchery cult of the so called lord of light from George RR Martin’s novels, or to the Roman Catholic Church’s child rape scandals as a figure (to say nothing of the Church’s own medieval child burnt sacrifices disguised as holy inquisitions) In “The Offering”, the priests of an unknown cult that appears to have post-Christian connotations get more when they bargained for when one of the victims turns into an avenger and makes them pay for their sins dearly and eternally, We get to know the story from the point of view of victims and the oppressors. The entire album is a ritual not merely lyrically for some songs, such as the two best tracks, the melodramatic “Scarlet Angel” and the closer “The Ghost of Innocence” evoke a feeling of a soul being released from the very pain of existence, possibly what was intended, release by emotional fire.

“Scarlet Angel”, starts out like Marillion, utilizes some Killswitch Engagesgue melody in verse and chorus, but then female vocals elevate it to the point where it becomes my second favorite track, especially because of how it made me feel. Now, this effect is made even stronger by the closing fantastic “The Ghost of Innocence”, where all instruments and vocals, including the female vocals and spellbinding use of keyboards which here finally emphasize the guitars and orchestral arrangements. I would love for Borealis to take that particular song and have it serve as the blueprint for the next album and I think that would make for a fabulous release.

Borealis can write good, fantastic as well as weak songs, which is not a good thing on a fourth album. Additionally, the similarity to genre’s leading bands like Evergrey and Symphony X, should be addressed for future releases, to make them stand out from the pack. All of this is reflected in my score, which in no way diminishes my appeal that you do give this album a listen, especially “The Ghost of Innocence”.

ISSA – Run With the Pack