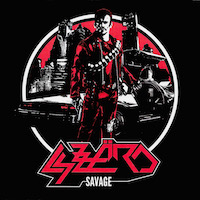 Lyzzard are a Portuguese heavy metal band who plays something between old Judas Priest and the first two Iron Maidens, with a touch of more modern metal. The overall impression I have is that, despite undeniable skills of the musicians and the powerful, robust production, the overall songwriting is of severely low quality and the question is why, which I hopefully shed some light on below.

Right off the bat, I have to admit that Tiago Azevedo (vocally Paul Di’Anno), Tiago Tedim (rhythm guitar), Ricardo Azevedo (lead guitar), bassist Margarida Veiga and drummer David Paiva are a group of unquestionably skilled and talented musicians and that, furthermore, the production of "Savage" is nothing to sneeze at either. Everything is punchy audible and loud. So neither is the issue. The issue is you can have all the production and skills in the world but in heavy music you must write good songs or else your effort is not worth the money or time spent in the studio.

Take Megadeth, for instance. Megadeth had great songs, decent money for production but ended up sounding so horrible on their first two albums because the boys put it all into bags under their eyes instead of production. Yet those albums have become classics and one of them many people regard as their best even over the universally heralded "Rust in Piece". Reason? Great, catchy, memorable songwriting of "Skull Beneath The Skin" (which actually served for blueprint to a latter hit "Holy Wars") or "Wake Up Dead" (about Dave Mustaine’s rocky relationship with Diana Aragon). Lyrically, then, Megadeth songs were treading the same paths as Lyzzard’s: metal, evil, girls, partying, more metal, more evil, more girls, more partying etc. but what made them classics was that they were so well written and memorable. This is not the case with Lyzzard and nearly half the "Savage".

Things do start interestingly enough – "Nightwatcher", the sound of wind and a prelude worthy of Iron Maiden’s 11-th album (the second one with Blaze Bailey) erupts into a very exciting track with changes of pace, marvelous guitarwork, melodic breaks and solos a’la best of Maiden, Metallica and Megadeth! Similarly , "Heavier Than Life" has everything that made the opener such fun to digest. While the Mercyful Fate-ian title track seems to be following the same formula for success, my expert experienced ear notices the slowly creeping trend for progressively diminishing quality and, sure enough, tracks 4, 5 and 6 can rightly be called filler, especially, since they are entirely devoid of those sweet breaks of the first three tracks. In fact, the consistently fantastic solo work remains the only aphrodisiac in the otherwise consistently asexual affair for a while.

The harsh irony I use so freely above is due to the band’s annoying and unforgivable penchant for skipping the chorus by having the verse riffs carry throughout the entire song at the exact same pace that screams boring crypto-powermetal with just the title of the song screamed for variety. I hate that. True, Megadeth did the same thing on "Devil’s Island" (Peace Sells) but that was one song, not all eight. The remainder had great powerful choruses. Such is not the case with 8/9 songs on the "Savage" album, where even the good songs have no choruses. In fact, the only track that has even a semblance of a chorus may be the point at which Lyzzard starts to climb out of the waste basket.

With "Queen of Vengeance", Lyzzard gradually ascends from the mediocre to good and by the time "Metalzone" rolls in things are almost as good as in the beginning, and we can add inspiration from "Spreading the Disease" (Anthrax) as well as, curiously enough, modern metalcore melodic flair a’la Bullet For My Valentine or Atreyu. Terrible, ain’t it? Well, it actually works and fits here very well. Now, why Lyzzard decided to cover the already criminally overrated Michael Sembello’s hit "Maniac" is anyone’s guess but I find it so horrible I don’t even take it in the account of the album lest I’d be tempted to deduce points. Should we start deducing points for crappy covers that only serve to artificially increase the total length of the album?

Being a new band with just one album in their discography and no prior convictions on their record, Lyzzard can and should be forgiven for making a mediocre debut, but I am reminded of the quality of the first two tracks as well as the incredible solos and melodies throughout and that makes me conclude that Lyzzard are either bad songwriters or good but lazy songwriters. Since I am still not entirely sure which is the case, I’ll leave that for you to decide.