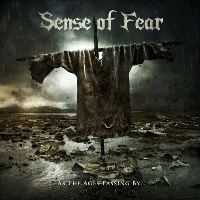 SENSE OF FEAR – As The Ages Passing By

At their core the Greek Sense of Fear may be a heavy metal band inspired by the likes of old Judas Priest, Iron Maiden and Dio but on close introspection they have their feet planted in more than one river. References are made to the very beginnings of thrash metal bands, whose thrash was still very much classic heavy metal inspired by the classics in the process of developing its own flair. The Greeks seem to have taken a snapshot of that era and recast it into their sound from which they molded "As The Ages Passing By". Vocalist Ilias Kytidis, a mixture of 80s Mille Petrozza, Tom Araya, Powermetal Phil Anselmo and Rob Halford, half narrates half sings as if he were casting spells, with some occassional Warrel Dane (Nevermore) thrown in. Consequently, the aforementoned "Powermetal", "Coma of Souls", "Show No Mercy/Hell Awaits", "Peace Sells/So far So Good", and "British Steel" along with copious melodic structures of Iron Maiden are roughly points of reference for the sound.

Yet the band is not above mixing in a few more or less modern influences along with quite a few pages from the golden thrash era. For instance, in the ballad "The Song of the Nightingale" I hear echoes of the Guns ‘N’ Roses classic "Don’t Cry", "Unbreached Walls" (with the audible "walking bass") recalls While Heaven Wept’s "Vast Oceans Lachrymose", while "Angel of Steel" reminds me of Enforsaken’s "Enemy Angel" (Sinner’s Intuition) and even Nevermore’s "This Godless Endeavor". Concerning the more thrashy influences, the very short "Lord of the World" is part "The Legacy" Testament part Anthrax "Spreading the Disease", while "Black Hole" opens up similarly to Metallica’ s "The House That Jack Built" (Load), through riffing similar to "Skeletons of Society" (Slayer, Seasons in the Abyss) with its ending procession similar to Megadeth’s "In My Darkest Hour" (So Far, So Good, So What!). "Torture of Mind" could have been on either Slayer’s "Seasons" or Kreator’s "Extreme Aggression", while "Slaughter of Innocence" is part Kreator part 90s Megadeth and it is the latter track where the guitar duo Gianis Kikis/Themis Iakovidis earn all the recognition and accolades they can get, though it is a mere prelude to what they are capable of. Last time I heard something as effective as the interplay in "Slaughter of Innocence" was Megadeth’s "She-Wolf" (Cryptic Writings) and this may even be better, but the most satisfying tracks turn out to be the last two, band’s title track and longest and the final, title track (over 9 minutes!), where they showcase musicianship as if spirited by Dimebag Darrel, combined with Maidenesque masterful melodic interplay, all of which, nevertheless, flies by so fast, you barely take notice of the passing time.

Given the excellence of its music, the name "As The Ages Passing By" is not without a sense of irony considering that it does sound a little antiquated in places, especially, with some of the guitarwork buried in the mix, unless, of course, it was done to emphasize it. This antiquity can be a blessing or a curse, however, while Sense of Fear have a lot going for them: great musicianship, excellent songwriting, section Dmitris Ghatziaris (bass) and Marcos Kikis (drums) loud, proud and tighter than lamb’s testicles, the fact that it took, through no fault of Sense of Fear, 19 years to get this stuff out there, has borne some mark.

Now, I know these guys will further update the sound and will deliver something equally excellent, hopefully in far less than 19 years from now. And that makes me think that Sense of Fear have a very promising future ahead of them if their tenacity and perseverance in the face of overwhelming odds against this release, is any predictor of things to come. May my words come true for them for they sure as death deserve it.