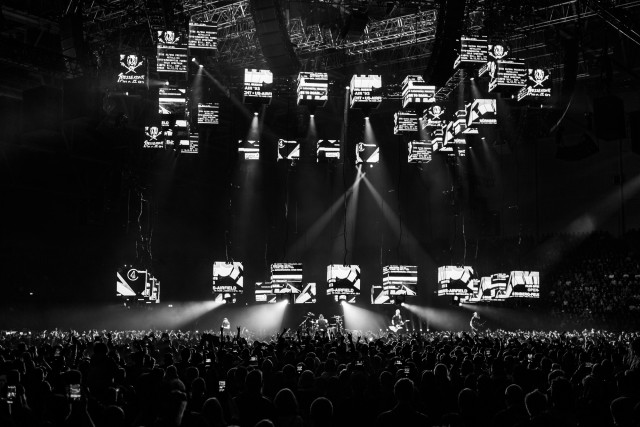 Whenever some large metal band draws the hordes towards the outskirts of Oslo and Telenor Arena there is a murmur in the crowd on busses, along the sidewalks and on the venue floor. «Will the sound suck again?» «Or is this one of those times when the band and its crew magically turns the venue of disappointment into the hall of sonic satisfaction it ought to be?». Telenor has gotten a nasty reputation over the years, but to be fair, it has housed som decent metal shows lately. The last Iron Maiden-gig comes to mind. One would think that the biggest freakin’ metal band on the planet are able to make some decent sound, even though this is the arena where more bands have failed to do so than not. But this is Metallica for crying out loud!

And of course, the bay area thrash-legends delivered the goods, but a perfect show it was not, first and foremost due to the sound. The show kicked off like everyone’s worst nightmare. The only thing audible was clunky drums and unintelligible vocal blur. Thankfully the production improved rapidly during the two first songs, but not until the sixth song – Now that we’re Dead – did the sound reach acceptable arena rock standards. From there on in everything was pretty much descent sounding, but quite a few songs were lacking in the punch-department.

That being said, Metallica still brought one hell of a rock show. The light rig, with screens and fire columns and some strange diode insects flying every which where was enthralling from start to end. The visual spectacle was an experience so captivating it almost justified the admission price alone. Put a band in great shape on top of that, and the concert turned out to be one of the more memorable at Telenor in a while. Not to mention the setlist. The highlights of the evening were Sanitarium, Creeping Death and One, followed closely by Seek and Destroy, For whom the Bell Tolls, Master of Puppets, Sad But True, Motorbreath and Enter Sandman.

It goes without saying that an awesome visual spectacle, a great set list and a charismatic band makes for a great show, but the concert as a whole was nonetheless brought a little bit down by sound which can only be described as average. The audience surely had a good time, and the classic songs never go out of style. Subpar listening experiences at Telenor Arena, on the other hand, gets old very fast every time you set foot at this soulless hall of disrespect. Its not fair to the audience and its not fair to the bands. Get your shit together Telenor, and preferably move yourself closer to town. As for Metallica, they are still rocking harder than most, and still shoving that metal up where the sun doesn’t shine like no one else. Did the ‘tallica outweigh the flaws of the venue? Definitely!

THE DEAD DAISIES – Burn it Down