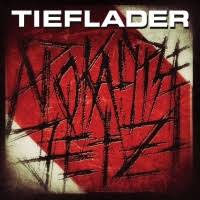 Ok so obviously these guys love their Pantera. German Pantera? Why not, the band is defunct, after all, and we could probably use a successor. Or the German public could since not everybody speaks German. Well, these guys may have a lot to do with Pantera, particularly from “Reinventing the Steel” but they do have a few tricks up their sleeves, including death, thrash, hard core, punk, nu metal, alternative and classic heavy metal influences that makes them stand above their, admittedly, prevalent, influence. As for Pantera emulation, it is done surprisingly well and the German language brutalizes the sharp and powerful style we all know and so many of us love. Whether Pantera needs a successor is debatable.

The opening title track “Apocalypse Jetzt” (Apocalypse Now) an obvious reference to the classic Vietnam War movie with Marlon Brando and Martin Sheen, subject already covered by Iron Maiden on their tenth album (the first with Blaze Bailey), is, if my German serves me, a summary of this world going to Tartarus in a hand basket (especially with the quality state leaders we have right now in countries I am citizen of). The track is, indeed, Pantera, through and through right down to Alex Scholpp’s “Dimebaggy” guitar, Benny H. Baur’s Vinnie Paulian drums, Robert Swoboda’s Rex Brownian bass on top of Patrick “Doc” Schneider vocally sounding as though Phil Anselmo guest sung in German. Schneider gets a credit for nailing the beloved frontman’s vocal stylings perfectly, and Tieflader for overall emulator prowess, but is there all there is to Tieflader (Low Loader)? Certainly not.

Already the next track “Gib Mier Die Hand” (Give Me The Hand) is a creepy, Mephistophelian theatrical deathly mini-rock opera that references Pantera only in main riffs, Schneider giving his best, not necessarily Anselmian, performance as he claims he sold his soul to the devil to have become the devil and we should henceforth call him an antichrist and 666, obviously tongue in cheek, wonderfully executed. Another song that deserves mentioning outside of the typical Pantera flair is “Sintflut” (“Flood”, yes, I know there’s a Pantera song “Floods”), but it may end up getting a bad rap as the chorus is straight up Korn from their debut. Still, very good song if you don’t hate nu metal with a passion, which I don’t. The remaining two tracks are, on one hand, more of a Pantera worship (especially totally Vulgar Display-style hard core/punkish closer), but also show a more progressive and varied side of this German quartet (Dunkelblau/Dark Blue), including COC, Megadeth and death metal at large, and for those reasons these are my two favorites. And given the fact that Tieflader have already two full lengths on their record, I don’t think they mean to sound Panteric all the time, no matter how much the promo releases seem to push it. There’s enough non-Panteric elements in Tieflader’s music to call it their own.

Tieflader sounds confident and professional and are not afraid to experiment with different styles and whatever they touch they execute real well and convincingly. I found it is when they don’t try to emulate Pantera but wax eclectic and progressive, instead, that they sound more convincing and that the direction of “Dunkelblau” should serve them best for the full length. In fact, they may not necessarily be ready to succeed Pantera, but neither do they seem to want to. My impression is that they use the Pantera style with a sense of humor to build upon their own style, which, again, if you don’t mind nu metal or alternative in your metal, can offer anyone a good time. And isn’t that what it’s all about, anyway?