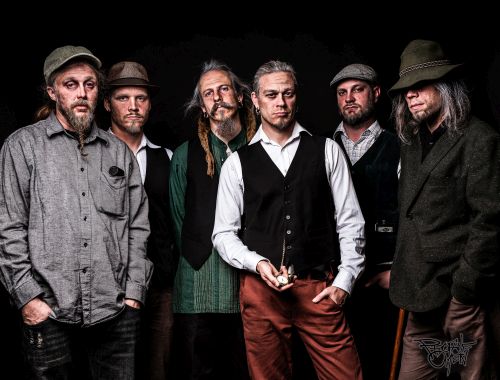 Finnish groove outfit PROFANE OMEN have finished recording their fifth studio album and are releasing a new single. The album, produced by Juho Räihä at Petrax and Soundspiral Studio is their first since their 2014 album Reset and is planned for an early 2018 release.

In addition to this, PROFANE OMEN will be releasing an entirely-acoustic album with completely new songs, which will only be made available through a pre-sale, which has yet to be announced.
To celebrate the completion of the recording, the Finnish sextet have released the video for their first single "The Tune of the Damned", taken from the acoustic side.

"The Tune of the Damned" sees PROFANE OMEN dishing out their groovy, melodic hybrid of clever melodies, intricate hooks and fast rhythms. It has a unique sound to it, that many fans of folk, thrash and heavy metal will appreciate, where the vitriol and vivacity of PROFANE OMEN can still be felt even without the layers of heavy guitar and drums. The video was directed by Petri Voutilainen.

This double album is the first since original bassist Tuomas "Tomppa" Saarenketo made his return to Profane Omen.

The band said of their upcoming album:
"On top of the fact that we had two basses for the first time, the songwriting process was also different.We wanted to recreate the sound of this band and we want to think that we succeeded. This is PROFANE OMEN."
The band are choosing to remain quiet on the concept, name and details of the album at this point in time. However, more will be revealed in due course.

To hear some songs ahead of the album release, the band will be playing the Lost in Music Festival on 7th October 2017 in Tampere, Finland, also featuring Battle Beast, S-Tool and IKINÄ (Event Page here)

"The Tune of the Damned" single can be purchased here.