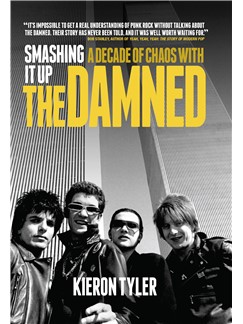 KIERON TYLER – Smashing It Up: A Decade of Chaos with the Damned

I think it is fair to say that many of us have longed for an in-depth biography on the legendary punk rock pioneers The Damned. Bizarre myths, strange legends, interesting lies, crappy half-truths, and pretty much everything in between all of those things have clouded and obscured the true story of the Damned and its rather convoluted, captivating, and downright insane history . I cannot even begin to tell you how pleased I was when "Smashing It Up: A Decade of Chaos with the Damned" by author Kieron Tyler showed up in my mailbox one day. The cover looked intriguing and it did not take much more than roughly four minutes before I was hooked and found myself unable to put the book down.

While Tyler primarily focuses on what may be termed the golden era of the Damned, the fact of the matter is that the years between 1976 and 1986 were the most interesting and action-packed ones. To phrase it somewhat dramatically, those years marked the band’s rise and fall regardless of whether we are talking about the Damned from an artistic or purely commercial perspective. Tyler guides us through the recording sessions, the content of the albums, the importance of certain songs, the chaotic and disorganized tours, the rivalries both within and without the band, the communication breakdowns between members, the record company hassles, the various line-up changes, and the eccentricities of Captain Sensible and the rest of those wildly interesting personalities that made up The Damned. Different members came and went, which somehow adds even more layers to the whole story and makes it even richer in detail and nuances in the sense that we are first and foremost dealing with talented musicians here and their inner conflicts, creative desires, and (interpersonal) relationships. The chapters on the band’s formative years and how it basically rose from the ashes of London SS only to release the first punk rock single ever ("New Rose") and how revolutionary it all was are enlightening, but I could say that about pretty much every chapter in this book. I do wish that the chapters focusing on The Damned’s career post-1986 and the less than glorious aftermath were a little longer and more detailed, but again, it makes perfect sense to devote the most time to the band’s pivotal years.

The attention to detail is absolutely stunning. It is not just that Tyler has done an incredible job of researching each and every conceivable aspect of the band’s inspiring and at times absurd will to persevere and conducted numerous in-depth interviews with its members, but the way in which he weaves all these threads together to form an all-encompassing whole is perhaps the most impressive thing about this excellent piece of literature. No stone is left unturned and no question is left unanswered. In short, all the fundamentals of superb storytelling are contained within its pages.

Well-written, cohesive, and above all enthralling, "Smashing It Up: A Decade of Chaos with the Damned" is everything that any self-respecting fan of the band and punk rock in general ought to seek out immediately. This beautiful hardback edition of Tyler’s thrilling narrative, which also includes a lot of cool and rare photos, deserves a special place in your home library. I dare say that this is one of those biographies that you will keep returning to over and over again. It is simply that good. Also, the fact that Tyler has managed to compose a book that perfectly encapsulates the unsettled and unsettling existence of the Damned while simultaneously forcing us to re-think the origin and development of the entire punk rock scene is a feat in and of itself. Compulsive and riveting literature, ladies and gentlemen.

A FORMAL HORSE – Made in Chelsea