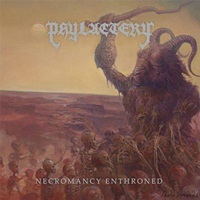 Edmonton death/thrash trio Phylactery may be a new name to many, but they probably will not remain dormant for long based on the savage songwriting present on this full-length "Necromancy Enthroned". Coming off a three song demo release last year, it’s obvious that these gentlemen prefer to keep their music lean, their approach primal, and the tones raw – just the way the original inspiration of thrash/death crossover came about. Active since 2013, they only go by initials (K.T. on vocals/drums, T.G. on guitars, J.M. on bass) – and their sound has venomous blackened energy at times, but overall is primitive and unrelenting as far as riff intensity, stop/start elements, and those sinister tom rolls that signal execution is near.

Caustic, repetitive screams against mid-tempo tribal-style riffing makes "Bubonic Undeath" a late standout, something you would expect from early Kreator or Sodom if taken on an early American death adventure. Ripping chord runs and entertaining little melodic guitar enhancement gives opener "Risen Restless Dead" instant credibility, especially during the Slayer-esque half-speed time change. A familiar early Megadeth riff circa the "Peace Sells" album registers "Wisdom of Heretics" less than ideal for originality’s sake – but you would be hard pressed to not stomp, swing, or shout to "King of Ruin". Mixing things up as to not be a one-trick pony, "Enslaved by the Dawn" features a bass solo that won’t necessarily dazzle but gets the job done.

"Necromancy Enthroned" sits in that territory for people who desire a rage-filled, aggressive outing that goes for the throat and says to hell with refinement or pristine accuracy. Which we all need a little more of in the thrash/death category these days.

KIERON TYLER – Smashing It Up: A Decade of Chaos with the Damned