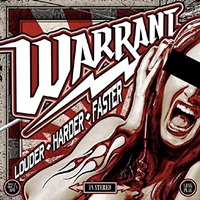 Their second Robert Mason-fronted record, Warrant aim to prove that they can remain vital and vibrant in the current melodic hard rock landscape – and not be relegated to being a pure nostalgia act. This album "Louder Harder Faster" has a rougher, grittier texture, moving light years away from their platinum plus days of their late 80’s and early 90’s hit records. The 11 songs appear to run along more bluesy hard rock lines, with occasional hints of attitude that should translate well live.

"Devil Dancer" has a sweet chorus and hypnotic guitar riff that builds with a solid lead break to get the energy rolling and encourage hand clapping, foot stomping action. As a band that certainly benefits from the power ballad era, "U in My Life" contains the right piano-action and tender melodies to tug at those heart strings – more in an old Beatles/ Styx mold which proves Warrant have developed as great songwriters. If you want high energy action, the title cut and "New Rebellion" fit that category, while closer "Let It Go" with its weeping guitar harmony action and smooth Robert Mason delivery makes for a classic California rolling down the highway closer.

In an era where bands choose to be very sure of themselves before releasing studio records, "Louder Harder Faster" is a worthwhile follow up to "Rockaholic", and may open up Warrant to a younger fan base while also keeping the converts committed to the cause. When you strip away the best hard rock records to a bare essence – it’s about focused hooks, melodies, and musicianship all rolled into a solid set of songs. "Louder Harder Faster" delivers on all fronts.