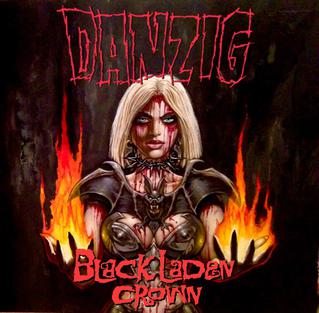 The legendary king of dark and sinister rock that is Glenn Danzig has returned with a new moody opus following a seven-year wait since the "Deth Red Sabaoth" album. Instead of talking about Danzig and the band’s back catalogue and so on, allow me to cut straight to the chase and state that this upcoming 9-track effort is a bit of a mixed bag. Why is that? Well, the first few tunes are hardly any interesting at all, more specifically the title track, "Eyes Ripping Fire", and "Devil on Hwy 9". They lack passion and never really seem to go anywhere not to mention that the intensity and gloomy vibe that we have come to associate with the band are missing. It is not until we reach the fourth track, "Last Ride" that things start to pick up and the song material turns into something compelling and wicked. The slower and slightly more morbid tunes really stand out here. The aforementioned "Last Ride" is excellent, the melancholic "The Witching Hour" is sublime, "But a Nightmare" is creepy, "Blackness Falls" is addictive, and, finally, "Pull the Sun" is a great and moving closing track. Each of those songs hangs on two or three really strong and memorable riffs that are impossible to shake once you have listened to them once or twice, almost as if they are hypnotic. "Skulls and Daisies" has a great vocal melody, but it lacks that sense of twisted excitement and a climax and therefore comes up short.

Sonically, Danzig has gone for a lo-fi sound that is rather dark and murky, but it lacks punch. It worked for the "Skeletons" album, but not this time around. It does have a certain charm to it in places, especially when it comes to those passages that are claustrophobic and unpleasant, but I wish the album production had some balls to it and was more overpowering and crushing. That would have done wonders for it, I think. It sounds too flat and almost paper-thin from time to time, which is frustrating.

Despite the fact that I am disappointed in some of what makes up "Black Laden Crown", I do think that the positive aspects of the album outweigh the negative ones, but I bothers me that the album is so uneven and contains four songs that are, to be frank, insignificant. Still, you ought to check the highlights out and cherish those morose compositions along with the fact that Danzig can still deliver tracks that make us shiver such as "The Witching Hour" and "Blackness Falls".