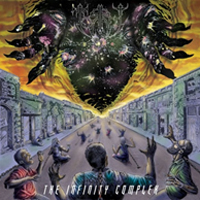 The Infinity Complex is the second full-length from Canadian thrashers Torrefy. The style reminds me of the more metallic and progressive sides of Ludichrist and Crumbsuckers as both bands shot off into the black holes of their demise. So soundwise, that is a good thing as far as I am concerned. And certainly, Torrefy are as adept at the instruments as either of those seminal acts. The rhythm section here is tighter than spandex and the bass is relatively high in the mix, mean all of the frenetic dynamics and tempo changes come through loud and clear. So far so good. The dual guitars churn out riff after riff in quick succession and the leads, which come thick and fast, deliver the good time after time.

The only problem for me is the vocal work of John Ferguson. I hate to single out an individual for criticism, but in this case, I feel that his almost screamo, jaguar-like snarl lets the whole thing down. It isn’t that it actually offends the ear or sounds bad at all, because it doesn’t. But it is quite one dimensional at times, and although it is fairly distinctive, it seems like it too often fails to lift the songs to the next level. It feels like the rest of the band wrote all the songs, making them as interesting and unpredictable as possible and then the vocals were just plonked on top. It helps that the underlying songs were a good basis to do just that, but I can’t help feeling that a top level vocalist would have had a bit more charisma and ideas that were better integrated into the fabric of the songs, which ultimately would have helped Torrefy better satisfy the monstrous potential that is so obviously there.

SARCASM – Within the Sphere of Ethereal Minds