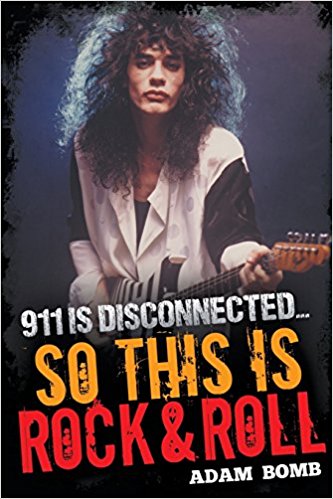 Adam "Bomb" Brenner may not be a household name as such, but the guy is a pretty interesting character in that he has been a part of the hard rock scene for close to forty years now. Apart from fronting his own solo act, he has toured with and/or performed on records by artists such as John Paul Jones, Steel Pulse, and Michael Monroe. This autobiography of his is a wild ride through loud rock music involving all kinds of rock ‘n’ roll experiences both good and bad.

Now, the thing is that Mr. Bomb is not exactly a super star as such or someone famous in the wider circles of the rock milieu, but that is all the more reason why this biography of his is so entertaining and strangely funny to read. Starting out as many others did by picking up a guitar following the revelation that was KISS, Van Halen, Rush, and the likes, Adam Bomb dreamt of becoming a rock star and set out on the path to fulfill that dream. However, the road was a rather bumpy one and things did not exactly turn out as planned. Having said that, he did persevere and never really gave in, which is quite admirable when you think about it. He got to audition with KISS at one point, he released solo records, he signed a management deal with Leber Krebs, and so on and so forth, so it is not as if he did not make a name for himself or anything like that. So here is a guy with a lot of potential and talent, but all kinds of weird and at times surreal obstacles just seem to get in the way of him attaining that most unholy grail of rock ‘n’ roll fame and credibility. Armed with determination and the will to succeed, but never seemingly being able to find that magical combination of players and like-minded band mates and whatnot, Adam Bomb’s story is a fascinating one. The book is quite juicy when it comes to stuff relating to drugs, drinks, chicks, one-night stands, cheap motels, and even cheaper skanks, but there is a strong focus on the actual music that Bomb was involved in creating. It is also quite evident that he is extremely passionate when it comes to guitars, so if six-string axes are your thing then you are going to love this book as there is a lot of love for the instrument on display throughout this tale.

The great thing about "911 is Disconnected" is that it feels as if Adam Bomb is just a friend telling you his story. There is something intimate about the whole narrative and Bomb seems honest and sincere when it comes to both himself and others, which is to say that his reflections on his past and his perspective on the whole journey are thought-provoking and nuanced. It never feels as if he is glamorizing or glorifying anything. There are plenty of bad and in some cases even traumatizing experiences that are laid bare and rather candidly discussed, but I think the way in which all those different contrasts well as we the highs and lows and so on is what makes it such a compelling read. My favorite chapters are the ones that focus on his tumultuous family life, his childhood and upbringing in Seattle, his first brush with rock ‘n’ roll, the early forays into a life of music and the Tyrant cover band he had with Geoff Tate (Queensrÿche), the partying and debauchery, meeting Van Halen and how that impacted him, and working at his father’s bakery when not jamming music or playing gigs. I also loved reading about his encounters with Izzy Stradlin, Axl Rose, Bill Aucoin, Tommy Thayer, Eddie Van Halen, and Billy Idol. There are lots of bizarre and at times hilarious anecdotes scattered throughout the book.

"911 is Disconnected – So This is Rock ‘n’ Roll" is an excellent book that is bound to entertain and enthral you. The best part is that this is only the first volume as the ending of the book strongly indicates that there will be a follow-up at some point.