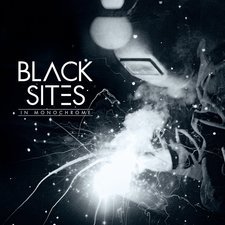 Black Sites from Chicago is the brainchild of former Trials guitarist/vocalist Mark Sugar and I must say that I was initially quite curious as to how this new band of his would sound. Musically, you can tell that the band draws from the well of classic heavy metal, 70s hard rock, progressive metal, and modern rock. The progressive elements that are scattered throughput "In Monochrome" are rather subtle though, but they do rear their heads now and again. There are quite a few groovy and semi-thrashy parts to be found on the disc, too.

I find it cool that Black Sites are inspired by so many different bands and artists (the promo sheet lists a long line of influences such as Black Sabbath, Voivod, Fates Warning, and Iron Maiden), but that does not change the fact that "In Monochrome" lacks quality songwriting and a sense of direction and purpose. There are a couple of memorable and well-constructed songs in which Black Sites combines catchy riffs and strong melodies with some good vocal lines and decent lyrics, namely the ones entitled "Burning Away the Day" and "The Tides", but listening to the album from start to finish is a rather tame affair with most of the tracks blending together and not really possessing much of an identity. Granted, some punchy and suitably aggressive riffs do creep in from time to time, but unfortunately they are far and few between. It also strikes me as weird why Sugar mostly utilizes clean vocals as opposed to varying them more in line with some of the occasional changes and shifts within the music. That would have added more diversity to the record and made it more dynamic and unpredictable, I think.

The more I try listening to "In Monochrome" the less I like it. It simply fails to capture a mood or peak my interest. These guys know how to handle their instruments, but the next time around I would appreciate it if they could actually write some gripping and emotionally charged tunes, because this 9-track effort sounds devoid of passion, intensity, and substance. I guess the bottom line is that the majority of songs on "In Monochrome" fail to move or provoke any strong reactions in me. It does not hold any surprises or unexpected turns either. This is quite the disappointment.