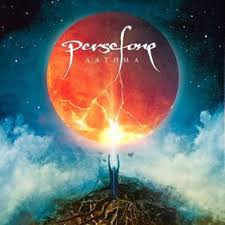 The progressive and melodic death metal ensemble known as Persefone has returned to the scene with a follow-up to the widely acclaimed "Spiritual Migration" album from 2013. This new musical statement of the band’s, which is entitled "Aathma" and consists of ten tracks, remains true to the core and essence of Persefone’s rather fluid and undefinable musical identity. Geeks will simply love this stuff as it is indeed highly progressive, intense, and technically superb, which is to say that it contains lots of insane riffing, diverse and varied vocals, epic melodies, and a multitude of complex layers.

Persefone presents a vast array of musical expressions and covers a lot of ground, not just in terms of spanning various genres but also with respect to the countless different moods and atmospheres they conjure up by means of their clever and yet unpredictable arrangements. Nothing is ever really straightforward as such and yet nearly every song is imbued with meaning and a certain flow and grace. The band allows different conflicting or contradictory forces such as beauty and ugliness as well as order and chaos to roam free on the album, but the whole affair comes across as insanely structured and nicely balanced in the overall perspective. The different moods of the album also tie in the with the lyrical theme and motif of the record, so there is a reason why things sound the way they do. The melancholy of "Cosmic Walkers" is captivating and so is the majestic feel of "Prison Skin", but these are merely two examples of what is on offer here. If you are looking for aggression then check out "No Faced Mindless" and "Stillness is Timeless". The moving instrumental track "Vacuum" is another personal favorite of mine despite its short length. The closing 20-minute title track (divided into four parts) fell a little short of my expectations, though.

I do think that the sense of the cinematic and climactic is lacking a bit this time around compared to the preceding album, which I think comes down to the at times rather weird sequencing of songs on "Aathma". I do appreciate the different segments of the album, but occasionally it feels as if there is a missing link either between each song or each segment. Still, there is musical grandeur and excellence to be found here, but the red thread connecting the whole thing is a little blurry in places. But take my advice and immerse yourself in "Aathma" on your own. If bands such as Arcturus, Opeth, Pain of Salvation, and similar bands appeal to you, then I dare say that Persefone will be right up your alley.