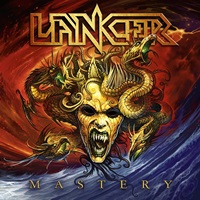 Making another monumental jump from Despotz Records on their second album "Second Storm" to the Nuclear Blast big leagues for this follow up, "Mastery" will either prove Lancer’s might in the power metal world or succumb to the doldrums of cult-like appeal without a major marketplace breakthrough. Considering the development of the five-piece since their 2009 beginnings, chances are high that Lancer could attain headlining status, given their dynamic songwriting and performance abilities.

A serene opening to the epic "Victims of the Nile" for instance reflects early Queensrÿche restraint, the clean guitars and lower register melodies very crushing as the song ping-pongs between power ballad-oriented heaviness and emotional tranquility – the mid-section instrumental allowing an Iron Maiden progressive-minded element to kick in. Guitarists Peter Ellström and Fredrik Kelemen waste no time unleashing their potent power chord fury, hitting all the right melodic textures and marching strains through "Dead Raising Towers" and "Freedom Eaters" that check off all the best aural hallmarks a la Hammerfall, Helloween, and the like (including a nifty bass solo spot for Emil Öberg in the latter). Mixing up the anthems with six to seven-minute arrangements that evoke classic metal comparisons keeps "Mastery" from being a one-trick pony, the rhythm section establishing a push and pull progressive/groove foundation that makes "Follow Azarel" an album highlight for the second half of the record.

As a vocalist Isak Stenvall has that high pitch propensity that could be a contender for Joacim Cans’ spot in Hammerfall should he need a twin – although there are a few spots where some Geoff Tate-oriented elements come into focus, especially during the lower range aspects when called for. Nothing wrong with the medusa oriented golden cover art, striking and tailor-made for Lancer’s driving, power style. Taking two steps forward in establishing versatility and variety while also maintaining the right command of memorable hooks and choruses, "Mastery" leans heavily to those who love Teutonic-oriented power metal.