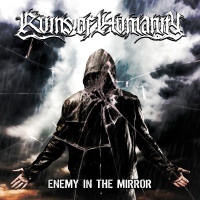 RUINS OF HUMANITY – Enemy In The Mirror

Ruins of Humanity sounds a lot like "Behind The Silence and Solitude" All That Remains (ATR) album and "Stings of Conscience" Unearth record, except the vocals, samey throughout this 4 track affair make me wish Ruins of Humanity were an instrumental band. Why Tuomas Valkola has to scream like that is anyone’s guess as it seriously detracts from the decent music coming out of his and Niko Peräkorpi’s guitar.

"Watch You Fall seems to have the best flow, "Reflection" riding the coattails of the opener but then it quickly looses momentum. "Severed" expands this standard melodeath affair to straight metalcore of Killswitch Engage variety, a very familiar territory, with even more ATR influence. While initially I thought it was good there was no verse/chorus structure I quickly began to feel that it is actually bad because the songs seem to endlessly meander and I am having a hard time keeping focus, my mind wandering, never a good sign. Indeed, Ruins, particularly in "Severed", rely on very simple main riffs which, despite good musicianship, beg for variety, a change of pace, a murder, burning or a hanging, death to the world or something different for crying out loud. Instead the main melody is played on it’s own with just  Stefan Laine’s bass which deepens the impression of  being stuck in one long song. The final, title track’s beginning recalls Witchery, builds nice but then timid and boring riffs bury it, the song a mess and I am really getting tired of the vocals at this point, but then it gets more aggressive almost in a thrashy way only to cut back to the same ol’ story of derivative melodeath glory for an uneventful finish. And while the whole thing may not sound like a rehearsal, as production is actually decent, it sure feels like a rehearsal.

Ruins of Humanity has a long way ahead of them. They have the skills and even some ideas but they need to seriously tighten up that songwriting, add more twists and turns, liven up the material. And I suppose working on those vocals would not be too outrageous a demand, either. Let’s see what the full length brings. While the material deserves a 3 I stretched it with hopes of soon dramatic improvement. Please don’t let me down, guys