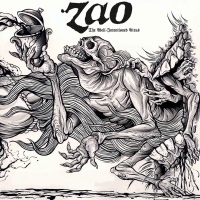 Zao started as a Christian band with Christ-centered lyrics (yes, there are non-Christ centered Christian lyrics) but after the fall out with Solid State Records over the brilliant "The Funeral of God" album they began to deviate from the Christian rhetoric and today not only are they not expressly Christian band but none of the original band members are present in the ensemble. As far as quality of the music is considered both changes are for the better. Zao always managed to create fairly original music within the limited progressive metalcore genre but "The Well Intentioned Virus" takes that to a new level.

The sound is oppressively heavy, with an almost industrial quality to it while captivatingly catchy and original while nevertheless tipping the hat to the likes of latter Sepultura, Pantera, Tool, Darkest Hour, Lamb of God and Between The Buried And Me. Especially that last reference rings true in the way the tracks ebb and flow. Favorites include the fantastic epic "Apocalypse" as well as "Observer/Observer" (with a bitchin’  walking bass line) which showcase Zao’s knack for creating unique melodic layers using simple household products, but every track has something to offer to a metal fan, not just a metalcore enthusiast. Granted, this is metalcore but metalcore done invitingly and captivatingly and most importantly headbangingly so if "Jimba Ittai" is any indication. That particular track has also a wicked southern rock slant which a Mastodon/COC/Down/Lamb of God fan will appreciate. "Haunting Pools" echoes Morbid Angel in-between clean vocal passages recalling vaguely Killswitch Engage, while "Xenophobe" just crushes you with its relentless power and brutality. Variety is the spice of life and Zao knows it and shows it aplenty switching between epic slow passages to mid-paced only to flood you with relentless speed and back again. And all the while you can hear the guys had lots of fun making this album in the way these southern rock, almost sludgy, riffs keep popping up. Zao effectively and appropriately end with serendipitously titled "I Leave You In Peace" making you craving more which what "play" button is for.

In today’s overflowing music market it’s good to hear a seasoned band like Zao create just metal for a metal fan without particular loyalty to any specific genre. I hope these guys will continue to push themselves as hard as they have on this album.

MORTALITY – For Whom the Bomb Tolls