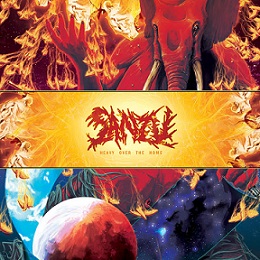 Although it was originally released by the band itself in 2015, Listenable Records decided to reissue "Heavy Over the Home" by the Australian death metal quintet named Sanzu in 2016. The band released an EP prior to this debut album of theirs, but "Heavy Over the Home" is my first encounter with these guys. Truth be told, the promo copy had been lying on my desk for quite some time and somehow disappeared inetween a whole bunch of other things that I had to review, but better late than never, I reckon.

At first, I was intrigued by Sanzu’s energetic mixture of US death metal and slightly more modern influences from hardcore music, doom metal, and even modern extreme metal ala Gojira and Devildriver. Actually, there were quite a few parts throughout the album that reminded me of Gojira, but then there were parallels to legendary outfits such as Obituary and Morbid Angel that stuck out, too. "Heavy over the Home" has a bombastic feel to it that is emphasized by the rumbling bass lines, the pounding drums, and the aggressive vocals. There is plenty of brutality on display here, but there is very little distinction between the actual songs themselves. Sure, blending different genres is a cool move and it does work to some extent, but following the first couple of songs it all becomes a bit same-y and a blur. It is not as if the album lacks energy, but nothing really sticks out and so eventually it all just feels like a pointless exercise in technicality and deconstruction of different styles of music.

The biggest flaw of "Heavy over the Home" is that very few of its tunes linger in one’s memory even after having listened to them a whole bunch of times. There are a few technical aspects of the album that are impressive not to mention that Sanzu has a rather clever way of mixing different genres, but the overall and lasting impression that I am left with is that the majority of songs simply lack substance and depth. They tell me nothing and they do not move me either, which is quite frustrating and annoying, really. If you are on the lookout for a brutal and technical cross between death metal and modern extreme metal, "Heavy over the Home" might appeal to you, but this one does very little for me.