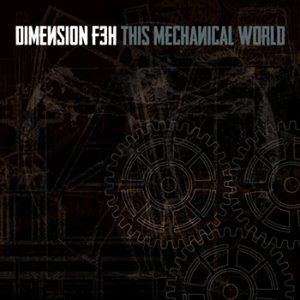 I have always had a thing for the experimental and blackened industrial outfit named Dimension F3H. There are many reasons why this particular Norwegian entity appeals to me, one of which is that no matter how far out there or insane their songs are in terms of structures and arrangements and so on, they always come across as both memorable and captivating. They walk that fine line between being challenging and tricky on the one hand and utterly catchy and attractive on the other. Also, while the band’s original brand of industrial metal may be said to sound cold, bleak, and cynical to some extent, it has this warm and organic quality to it that makes it sound lively and vibrant too. I am merely summing up how I feel about the band in general here, but the thing is that everything I have said so far totally applies to the band’s brand new and long-awaited full-length assault entitled "This Mechanical World". In fact, this awesome and atmospheric 2016 output is their best yet. First things first, Dimension F3H has never produced a batch of songs that are as instantly catchy as the ten songs that comprise "This Mechanical World" are. Punchy, hard-hitting, and aggressive, but with just the right amount of dynamics and diversity added to make for a compelling and interesting album. The great thing is that the album is coherent and cohesive all the way through, which entails that it never loses momentum. In addition, the electronic elements add a sense of edge and danger to the proceedings while the varied vocals underline just how harsh and thought-provoking the band’s lyrical universe is. Highlights include the hypnotic "The Dreaming", the face-melting "Hammer", the moody "Those Who Make Things Worse", and the epic title track. There are lots of cool twists and turns in places that will make you sit up and pay attention to what is going on. Trust me on that.

"This Mechanical World" has definitely been worth the wait. Sinister and mechanical music has rarely sounded better. Like I said, this is the best Dimension F3H album to date. Let us just hope and pray that we won’t have to wait a billion fucking years for the follow-up to this excellent disc!