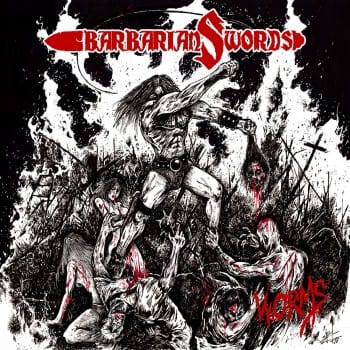 Spanish outfit Barbarian Swords lives up to its name by means of filthy and ugly black metal mixed with vicious sludge and savage doom metal. A truly nasty mix that reeks of all that is violent and despicable. This 9-song effort entitled "Worms" has a nihilistic and cynical edge to it that makes for an unsettling listen and the cold and raw riffs seem hell-bent on dragging one down into the deepest pit of hell. Song titles such as "Christian Worms", "Total Nihilism", and "Carnivorous Pussy" say it all. Yes sir, Barbarian Swords is for neither sissies nor wimps.

In many ways, Barbarian Swords brings to mind Hellhammer due to its claustrophobic and punishing sound, but one could argue that the atmosphere that emanates from "Worms" is less dark and yet more varied than anything the legendary Swiss outfit ever put out due to the blend of different genres. The majority of songs are quite long and attain a strangely epic vibe in places. A few parts even possess a hypnotic quality, which is cool. However, some songs drag on for excessively long without any sense of purpose, the 18-minute track named "Requiem" being a good example of that. As a result, the album is a tad uneven and a bit of a bore in places, but the majority of songs range from decent to interesting, which is to say that "Worms" is well worth checking out. It just loses its momentum here and there.

Mixing caustic and minimalist black metal with sludgy riffs and crushing doom parts works well in the case of Barbarian Swords and one cannot deny that the album has a sick and vile charm to it. If you are feeling utterly depressed and worthless, give "Worms" a spin. It will make you feel even worse. Barbarian Swords is a musical manifestation of misanthropy.

NIGHT RANGER – 35 Years and a Night in Chicago