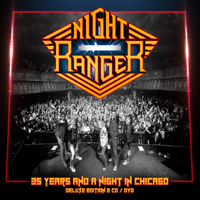 NIGHT RANGER – 35 Years and a Night in Chicago

The legendary US hard rock ensemble that is Night Ranger recently released this 2CD/Blu ray live package via Frontiers, and I must say that I am impressed by the whole thing. The audio quality is superb, the musicianship is stellar, and the selection of songs is a fan’s wet dream come true. Every member of the band is right on the money and delivers each damn note with passion and intensity. At the same time, this live document has a raw sound and an organic vibe to it that results in one actually feeling that one is right there at the venue in Chicago while these guys are performing on stage. In that sense, "35 Years and a Night in Chicago" succeeds in transferring the feeling of watching the band perform live to a set of records, which is more than can be said for many other artists and outfits whose live offerings are somewhat meager and lackluster.

In truth, I have always felt that Night Ranger was better live than on record. I am not saying that these guys are not good in the studio or anything like that, but their songs translate so well to the stage and attain even more energy and atmosphere compared to their studio counterparts. Also, listening to Brad Gillis let loose and rip it up in a live setting is simply awesome! Vocalist Jack Blades is in great shape and knows exactly what he is doing. The Chicago crowd is enthusiastic and hurls a whirlwind of applause and screams towards the stage throughout the band’s 18-track set, and I can totally understand why. The inclusion of the song "Day and Night" is a great move and the renditions of "Sing Me Away", "Rumors in the Air", and "Penny" all rock hard.

For some weird reason, Night Ranger remains an underrated and underappreciated outfit, at least in my opinion, which truly is strange given the quality of their albums and songs not to mention the band’s abilities on stage. "35 Years and a Night in Chicago" proves that Night Ranger is still up there with the very best that the hard rock genre has to offer and that the band has a lot of mileage left. Unfortunately, I cannot comment on the accompanying Blu ray disc as I only received the audio files, but given the quality of the CDs I am guessing that it is well worth watching.