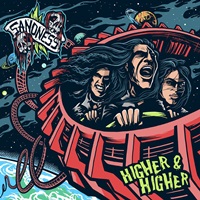 Developing from a project as two teenage friends in 2008 into a full-fledged trio, Italy’s Sandness straddle the sleaze/glam metal lines on their second album "Higher & Higher". Keeping the sound lean and mean, aspects of Poison meets LA Guns in a dark Scandinavian alley come up when taking in songs such as "Street Animals", the uplifting mid-tempo cruiser "Sunny Again" or the down and dirty "Monster Inside Me" – the latter featuring killer guitar harmony action from Robby Luckets.

Expect multi-part chorus vocalization that drives home the lyrics in a symbiotic, one with the audience manner – the weakest part being the main delivery from bassist Mark Denkley as his pronunciation for select tracks ("Hollywood" most notable) make it clear that the punk-ish delivery can be a tad pitch bending when maybe lower register work is in his wheelhouse. The finale "Will You Ever" is a six- minute power ballad with a twist – piano strains bookend the proceedings, giving way to a fairly heavy guitar foundation, bluesy with a Wild West feel to these ears.

The cartoon oriented cover art with the band members on a twisting roller coaster works – as it shows the thrilling aspects of what you can expect. I know plenty of people these days want material that gets them off their feet and forgetting about the daily struggles that they face. Sandness delivers in that regard – so if you live for the late 80’s glam metal scene with a tip of the cap to the current Scandinavian brigade, "Higher & Higher" achieves the desired result.