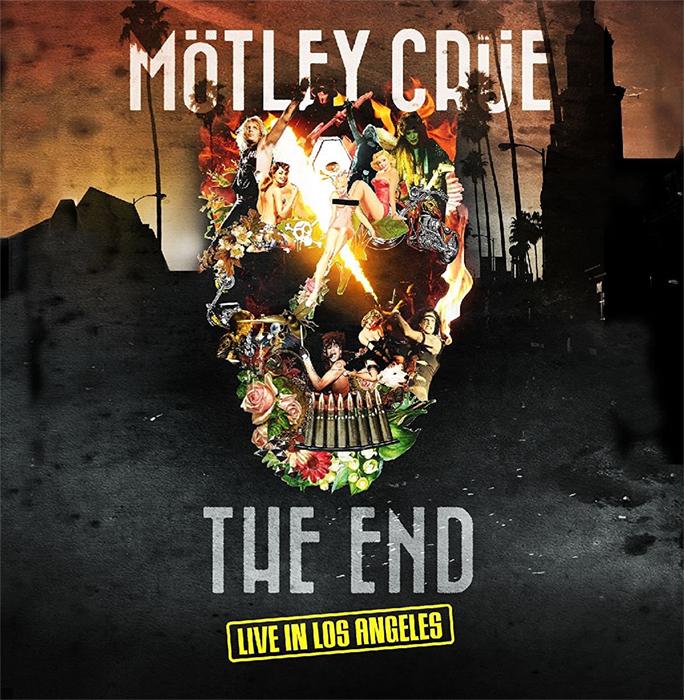 The legendary vortex of crazy rock ‘n’ roll that was and is Mötley Crüe played its final show ever at the Staples Center in Los Angeles on New Year’s Eve 2015, and there is no doubt that what the audience witnessed that night was something historical and highly emotional. After all, we are talking about four decades of blood, sweat, tears, triumphs, defeats, and kick-ass music coming to an end.

For those of us who were stuck thousands of miles away in Europe, the band’s last gig was captured on tape and film, and as I am sitting here and holding this awesome "The End" package containing the Blu-ray disc as well as the CD between my hands, the whole thing just looks so incredibly appealing. Luckily, the actual content kicks ass and is truly fascinating and captivating to watch and listen to. This live document is something akin to a triumph and proves that the band went out on top.

The way in which the show has been filmed is unique in that you get a sense of just how enormous and epic it is all the while you feel really close to the stage and the band, so it strikes the perfect balance between being large in scope and intimate. The symbiosis between Mötley Crüe and the audience is electrifying, and the energetic and vibrating atmosphere of the show is awe-inspiring and downright frightening to behold.

Each member of the band is firing on all cylinders. I know that some fans and critics have problems with Vince Neil omitting a few words from time to time and altering a couple of things here and there as well as having the audience sing some of the lines, but I think it has a certain charm to it in the sense that he does not adhere rigidly to the records. There is a certain spontaneity and an intuitive feel to what he does on stage, and I really dig that. It just works for me. Besides, it would be kinda weird if Mötley Crüe anno 2015 sounded like an except replica of how they sounded twenty or thirty years ago. Things change. People change. Bands change. The bottom line is that he sounds great on "The End" and that Sixx, Lee, and Mars all deliver the goods. The musicianship is excellent, the stage show is simply mind-blowing, the sound is full and crushing, and the whole thing is just a riveting experience.

There is something special about the live renditions of "Primal Scream", "Mutherf***** of the Year", and "Saints of Los Angeles". I cannot put my finger on what it is, but as to "Saints of Los Angeles" there is something strangely prophetic about that song and its lyrics being performed on this particular night, almost as if it encapsulates thirty-four years of insanely hard work, records, tours, fights, people leaving, people coming back, and so on and so forth. The classic cuts all sound great and the emotionally charged rendition of "Home Sweet Home" on that tiny little "encore" stage following the main set is a stroke of genius.

The most compelling parts of the bonus features are the rather in-depth and candid interviews with all the members of Mötley Crüe. Definitely worth watching!

"The End – Live in Los Angeles" is a very moving experience, but at the same time it feels good to know that the band chose to bow out in style and leave us with an everlasting legacy of timeless songs and great memories.